This trip came about because I wanted to see some ancient ruins and I had always been interested in Greece so decided to start in Athens and take 2 or 3 months cycling back to the U.K.  A friend from New York persuaded me to take his video camera and shoot a kind of video diary, I figured I had nothing to lose so despite having only ever used a video camera once before. (There are some links to our short films at the bottom of the page)

My Cycle Route for this trip

I flew to Athens on the 8th October 2007 and spent a day and a couple of nights exploring the city which was full of ruins and rich in history but struck me as a poor city in modern times. I then cycled from the Greek mainland to the Peloponnesian peninsula, the two separated by a four mile wide isthmus effectively making Peloponnese an Island (look at a map). I crossed the Corinth Canal which cuts through this narrow strip of land, it was really deep and only 21 metres wide with the water running through at sea level.

Once on Peloponnese I followed the Eastern coast until Leonidio before heading inland on probably the biggest climb I have had to endure so far, I absolutely hated the 15 Mile Climb but it became one of my highlights. It demonstrates really well the most annoying aspect of cycling through hilly terrain, it can take hours and hours to climb up and then 15 minutes to descend, meaning you spend most of your time climbing compared to a tiny percentage descending. Another highlight came when I changed direction and started cycling north through some burnt out areas, created by the fires which devastated the Greek countryside in the summer of 2007. 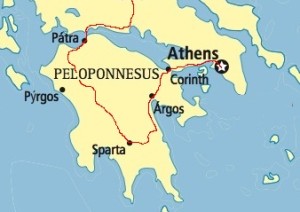 My Route around Peloponnese 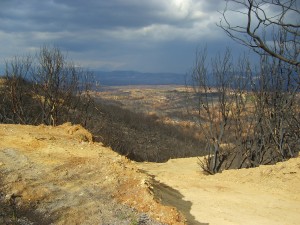 The burnt out land 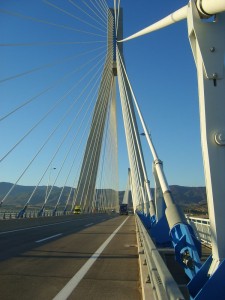 View from my tent, harvesting olives

I crossed a modern bridge to reach the mainland and continued cycling along the pretty coastline reaching Itea in time to buy my evening food before setting up camp amongst the olive trees at the bottom of the climb up to Delphi. The day after Waking Up with People Harvesting Olives and the Ruins of Delphi were both highlights. 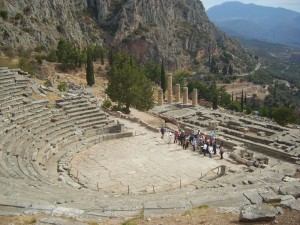 The ruins at Delphi 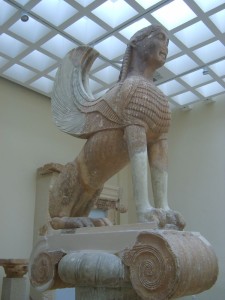 One of the odd statues – Delphi

I cycled past Thermopylae where the 300 titans fought their famous battle stopping in a few towns with not much going on, except when I watched a man urinate on his own bike. At the end of Day 14 I arrived in Kalampaka to eat, before setting up camp in the fantastic Meteora Complex,an area with monasteries built on top of natural sandstone rock pillars. 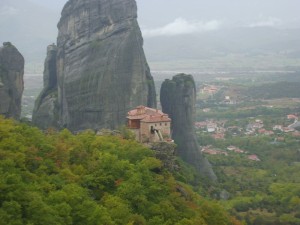 Meteroa – a monastery on top of a huge rock pillar 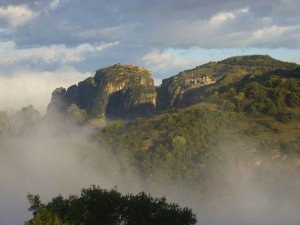 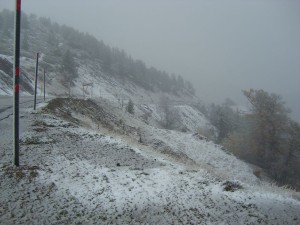 The snow when I crossed the mountains

I had a couple of wet, boring days, including My Mountain Crossing Experience where I got caught in the snow and after that crossed into Albania which turned out to be a surprising highlight in itself and full of highlights. It was culturally very different with Fascinating People and things like A Road Side Abattoir and Bars in Petrol Stations.I met some great people, my favourite of which was a man I met when entering a tiny town, he had no legs and was sat in the middle of the road stopping cars going in either direction and asking them for cash. 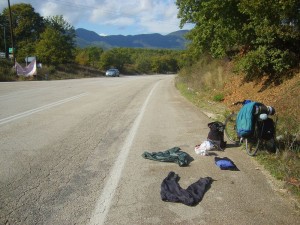 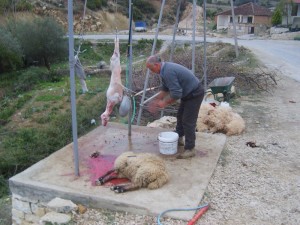 Albania – killing sheep at the side of the road 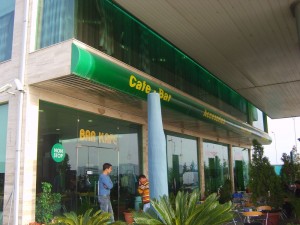 Albania – bars in the petrol stations

Over the next couple of days I cycled out of Albania stopping in Lezhe to see the Skanderbeg tomb (Albania’s most famous historical figure) with all its plaques commemorating his victories in battle during the 1400’s. I crossed into Montenegro and noticed the rim of my back wheel cracking, this and something I had just consumed in Albania were the beginning of the end of my trip.

My Route along the Adriatic Coast

On the night of Day 22 I was camping in the hills above one of my highlights Kotor but really this was the start of one huge highlight lasting the next 9 days. The condition of both my health and the back wheel worsened but I continued and loved the coastline after Kotor, the Adriatic coastline was beautiful, as were the cities of Dubrovnik, Split and Trogir and (although I hated it at the time ) I even look back fondly on Waking up in a Puddle in Croatia. 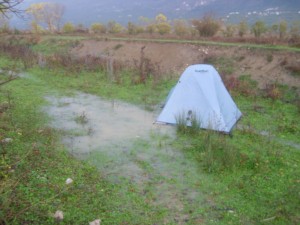 Adriatic Coastline – the morning I woke up in a puddle 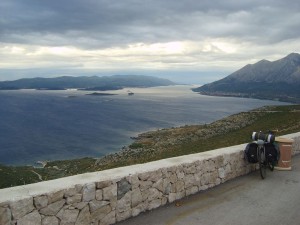 Adriatic Coastline – on my way down to catch a ferry 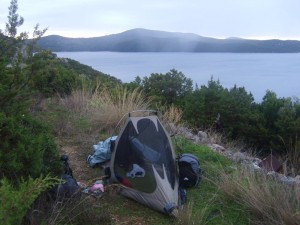 Adriatic Coastline – a beautiful place I woke up in 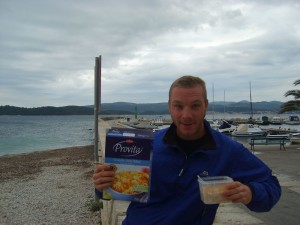 Just after Sibenik I decided to go home early as I was becoming quite ill. I spent 2 days lying in a field in order to recuperate enough strength to cycle to town and catch the train to Zagreb. I spent a couple of days in the capital, resting in bed and in parks and I was lucky to find accommodation as most of the hotels were about €80 but I found  a dorm for €11 in a hostel that had bars on the windows and I think was a former prison.

Day 35 I flew home and was in real pain for 4 or 5 days but I went to the doctors, gave a sample and got some pills to relax my intestines. The results came back and I was infected with Campylobacter and started taking antibiotics which made me feel better, although I still wasn’t 100% 2 weeks after I landed.

After Christmas I returned to Queens to work for another 6 months to fund my trip around Asia. 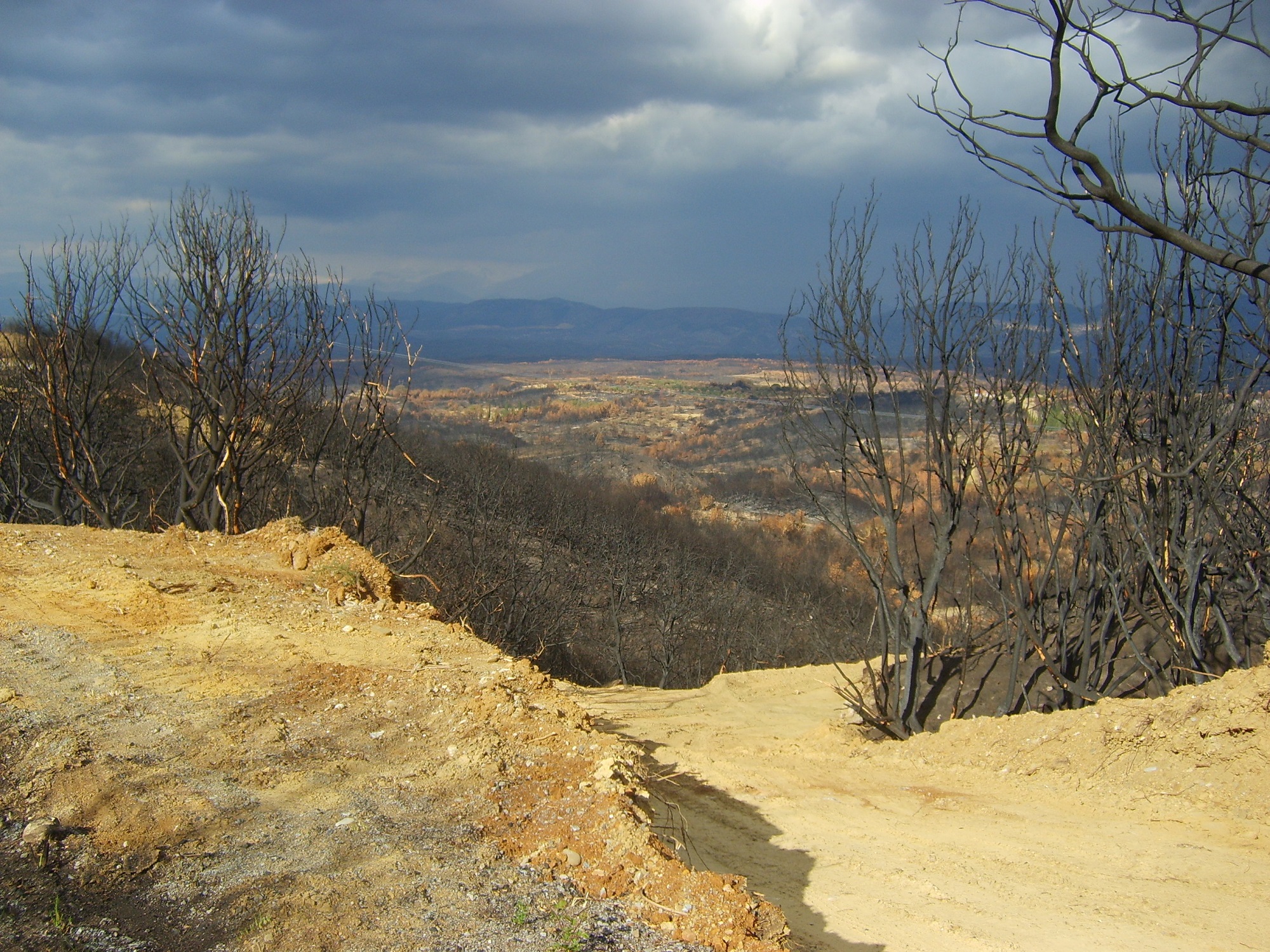 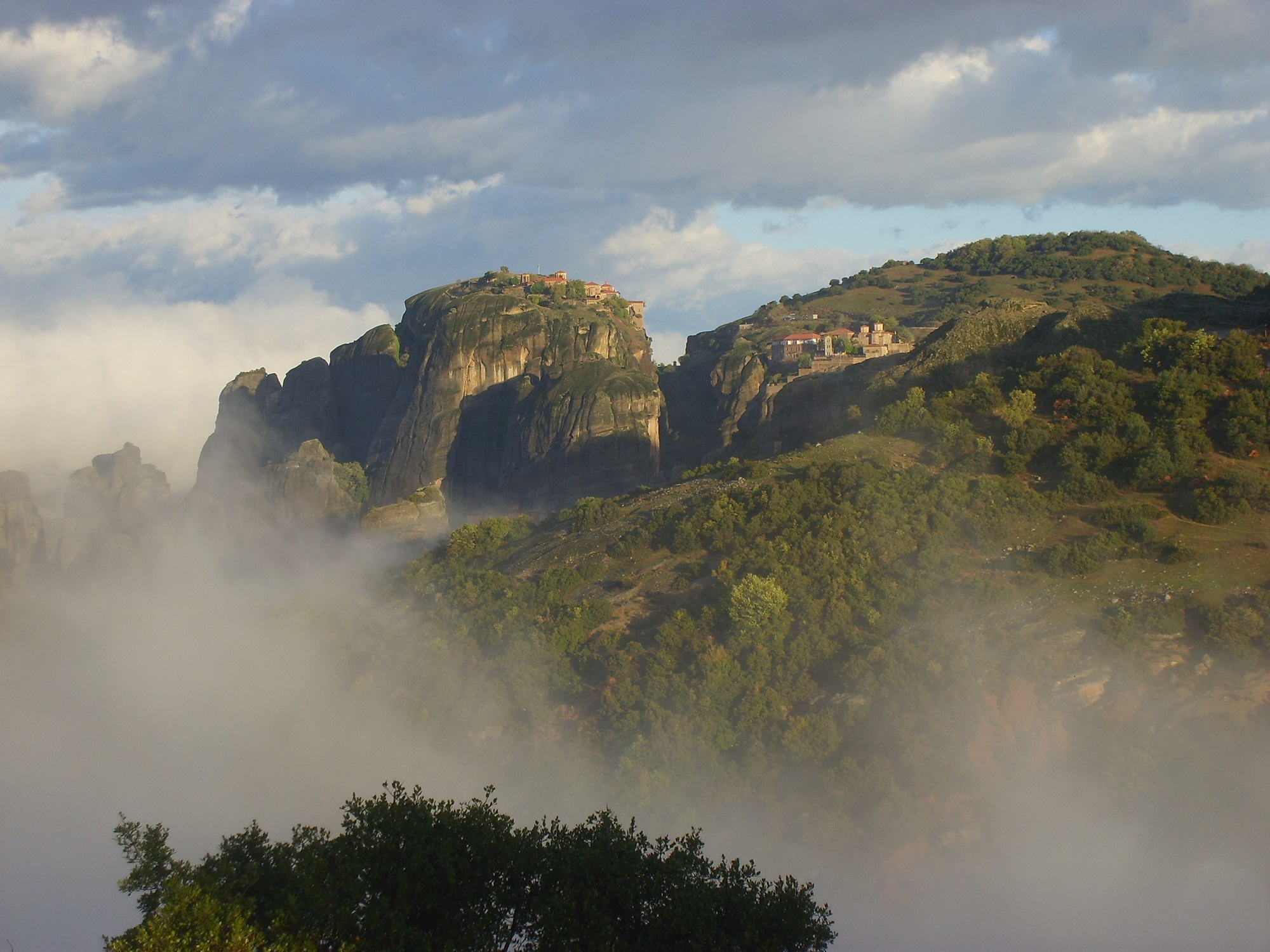