France has thousands and thousands of megaliths and in the summer of 2013 I went with Rich on a roadtrip to visit a couple of areas in the South which are full of different types of site. We drove around the regions close to Lodeve (Languedoc-Rousillon) and Figeauc (Lot), sleeping in the car for a week in order to stay within the trip budget of 100 Euros each. The sites visited were chosen for different reasons but we wanted to show the variety in the sites and to show comparisons with other megaliths around the world.

Below are details of some of the sites we visited, for more info please visit our Modern Explorers website 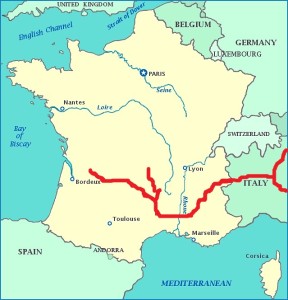 Our Route Around Southern France 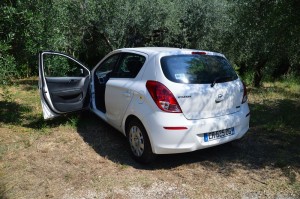 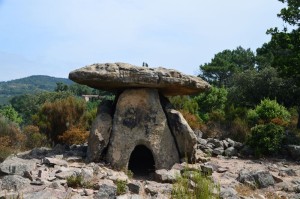 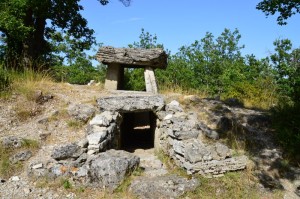 A film about the Gallardet Dolmen 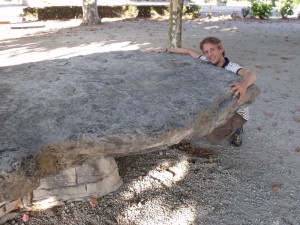 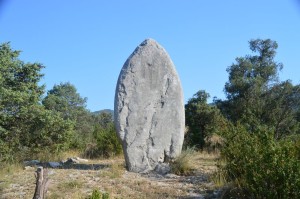 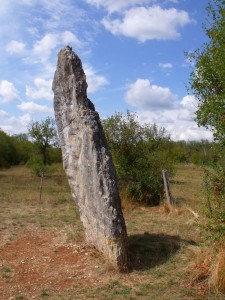 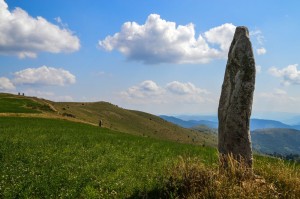 You can view our film – Standing Stones 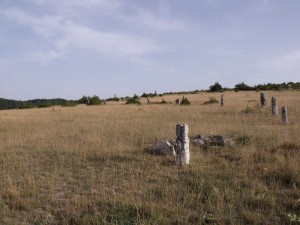 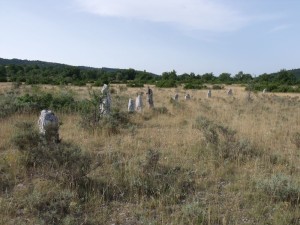 You can view our film – Stone Circles in France

The most famous spheres from around the world are found in Bosnia, Mexico and Costa Rica but on a sandstone plateau above the village of Saint-André-de-Rosans in the Hautes-Alpes region there appears to be several hundred. They are far from the regions we had chosen to visit but whilst travelling close to Lodeve we found out about these possible stone spheres and there was no way we were going to miss out on seeing them. It was a beautiful place well worth strolling around. 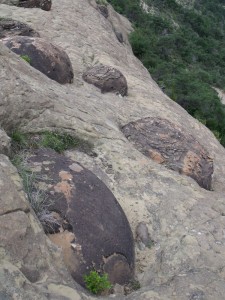 Balls bulging out of the mountain 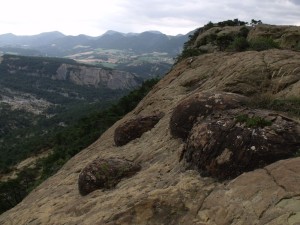 You can view our film – Stone Spheres in France

Les Ecuelles du Diable – within the grounds of the St Michel Priory, a few hundred metres from the Coste-Rouge dolmen there are a number of strange shapes carved into the rocks. Several rocks have curious basins and channels carved into them, which are thought to have been sacrificial tables with the channels used for the blood to run through. There are stories of sacrifice and some think the shapes were carved to be used as thrones. 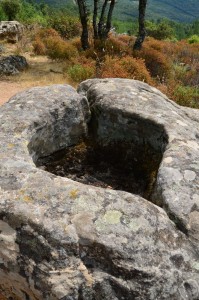 One of many chambers carved into the rocks

We intended to drive from France to Bosnia to film The Bosnian Valley of the Pyramids but thanks to www.europeanpyramids.eu we discovered that Italy has a host of potential pyramids and we thought we would investigate that instead. Rich and Mick hired a car to act as their sleeping quarters and transport as they drove over 3500km to take a look at these sites for themselves. Interestingly they seem to fall along a line running from north to south through the centre of Italy so we wonder whether this connects with the global telluric energy grid. We also visited some Etruscan ruins close to Rome and some fascinating ancient walkways which have been carved out of the rock.

This hill has the most convincing shape of all the hills/pyramids we saw. The faces are orientated in relation to the cardinal points and there have also been stone spheres discovered in the area. 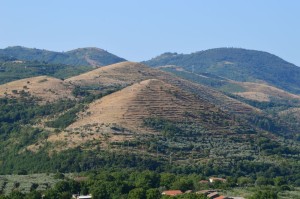 Not far from Terni overlooking Lago di Piediluco there are two hills either side of the lake that are suspiciously shaped. We videoed and photographed them both from a variety of angles including from the top of the castle that is built on top of one of these hills/pyramids. We left this area thinking that both hills/pyramids looked very much liked pyramids from certain angles but were less convincing from others, one is like a toblerone shape similar to Mother Earth in Bosnia. We also felt that just because they are not perfectly shaped like your convential pyramid didn’t rule them out being ancient structures of some kind, the mystery continues.   You can view our film – 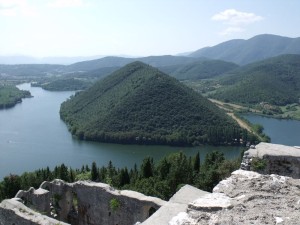 View of one Pyramid from the top of the other 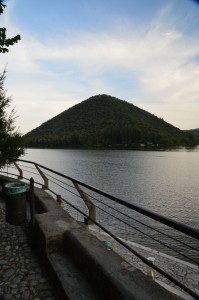 A view of an obvious pyramidal shape

Not far from Florence next to the town of Pontassieve there are 3 hills which are suspiciously shaped. Again they are very convincing from certain angles but less so from other angles, so much so that when we first arrived in the valley we struggled to work out which hills were supposed to be pyramids. This is because the hills in question appear to be very close to larger hills just behind them almost as if they are attached, again we don’t think this rules them out as being huge ancient structures. There is evidence of settlements in this area 25,000 years ago so it’s possible these were built or modified to be in the shape they are but without excavating we can only speculate. 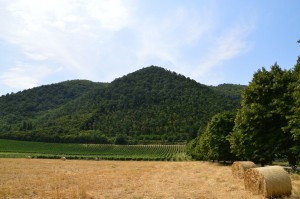 The biggest of the hills

There are possibly 9 hills in the area north of Milan in the Parco regionale di Montevecchia e della. The area is full of hills with a tiered structure, which is one of the reasons these are believed to be pyramids.  We were there on a cloudy day so couldn’t get many distant views, up close there are flattened tops, one of the hills/pyramids has a megalithic stone on top and there is a carinal point alignment with a slight offset. They argument is far more convincing with an aerial view as you can see a clear pyramidal shape but they would be very old with lots of sediment build up. This was one of the least convincing areas that we visited on our trip but we are still open-minded and look forward to more research and hopefully some excavation. – We have some footage so will release a film as soon as we get a chance but you can check out our photos or for more information the European pyramids website (http://www.european-pyramids.eu/wb/pages/european-pyramids/italy/montevecchia.php?lang=DE)

In an area full of megaliths there is a pyramidal shaped stone 5m x 5m x 5m with some alleged cup marks in the shape of the star constellation of Cygnis (Swan) from 13500BC.

One thing we noticed was the pyramid shaped hill forming the valley within
which this stone sits, a beautiful hill with a building right on its summit.    You can view our film below 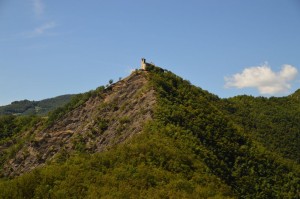 The hill next to the Pyramidal stone 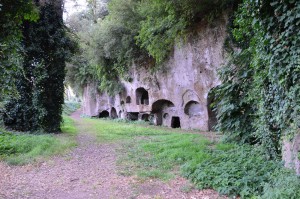 We were passing just north of Roma and we thought we would stop off at some interesting sites potentially built by the megalithic builders. The tombs are allegedly Etruscan but we could see little evidence to suggest they were built by the Etruscans, maybe they used them but why did they necessarily build them. The site has hundreds of tombs which stretch out over a Kilometre towards the town of Orvieto.  The style of the “tombs” cut out of the rock is similar to things we have seen in other places around the world, such as Turkey and Malta.

Not far from the “tombs” there is a network of ancient trackways or narrow roads that are carved into the Tuscan tufa cliffs and stretch on for miles and miles. We visited the ones near Sovana which are cut vertically out of solid rock, some 10-12m deep but only as wide as an oxcart, which connect the valley floors to roads on the clifftops. The roadways at the bottom of the slots have been eroded from centuries of abrasion, it’s a fascinating place to hike around and explore. 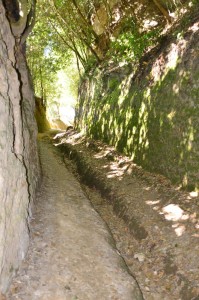 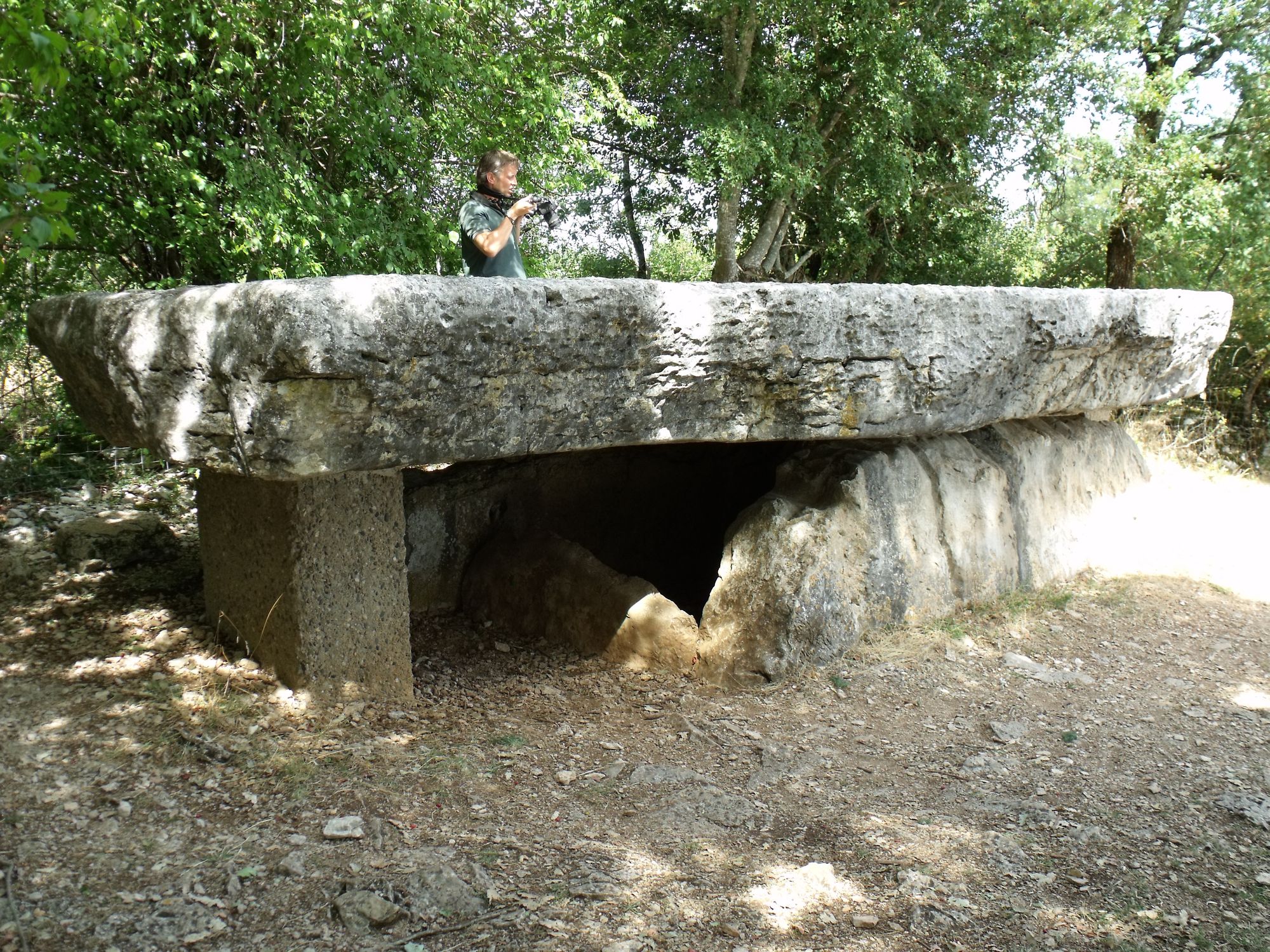 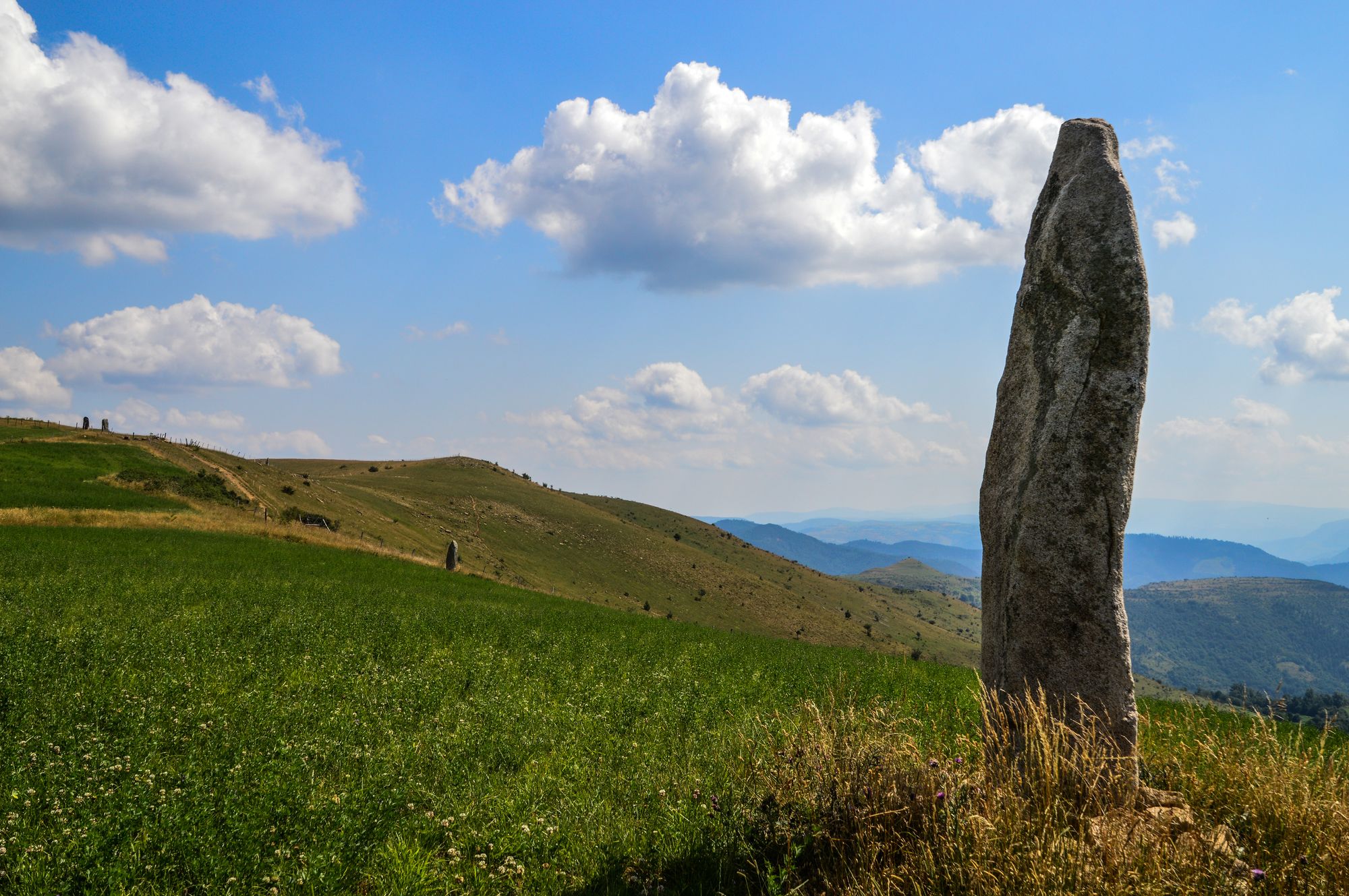 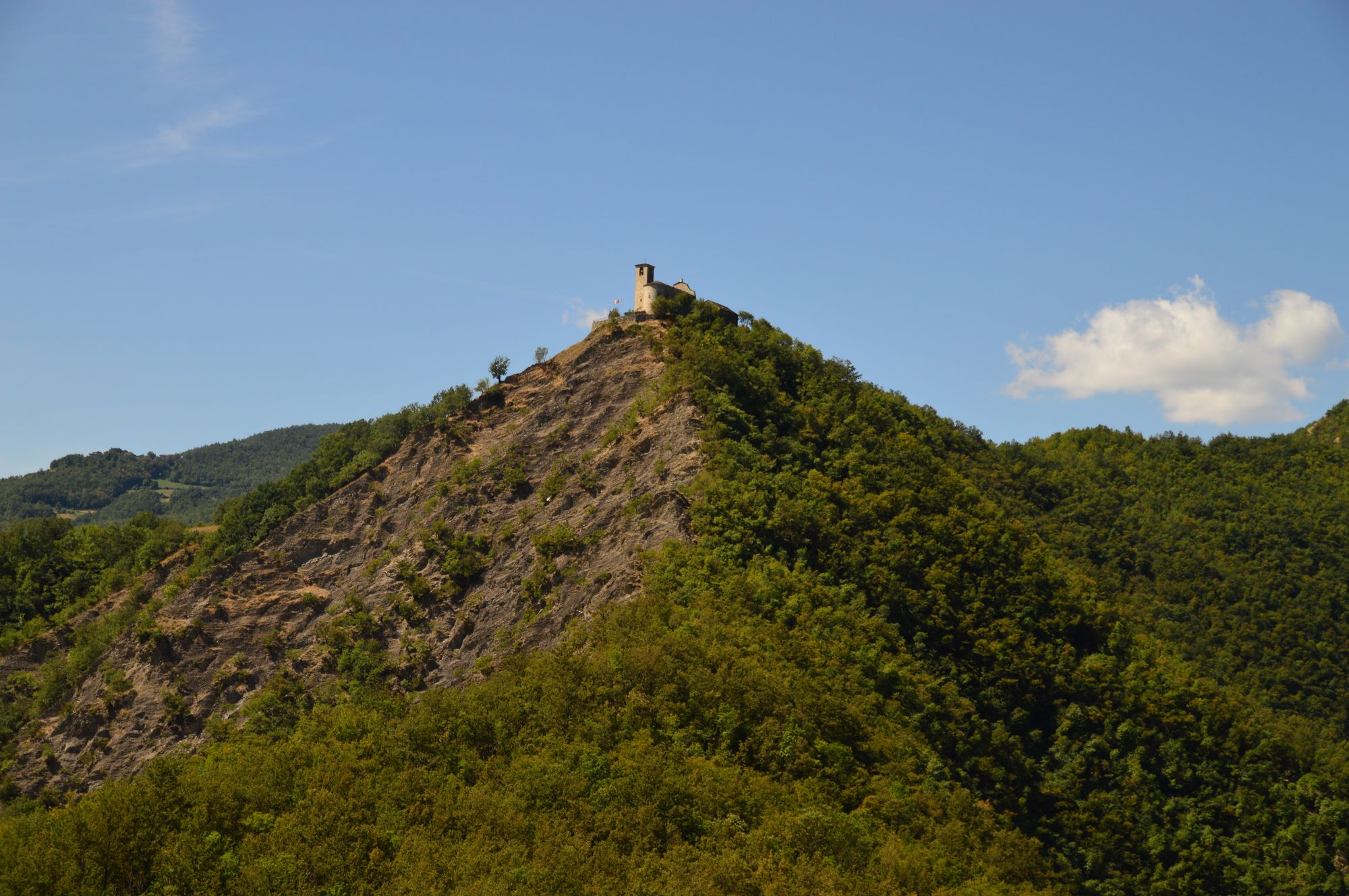 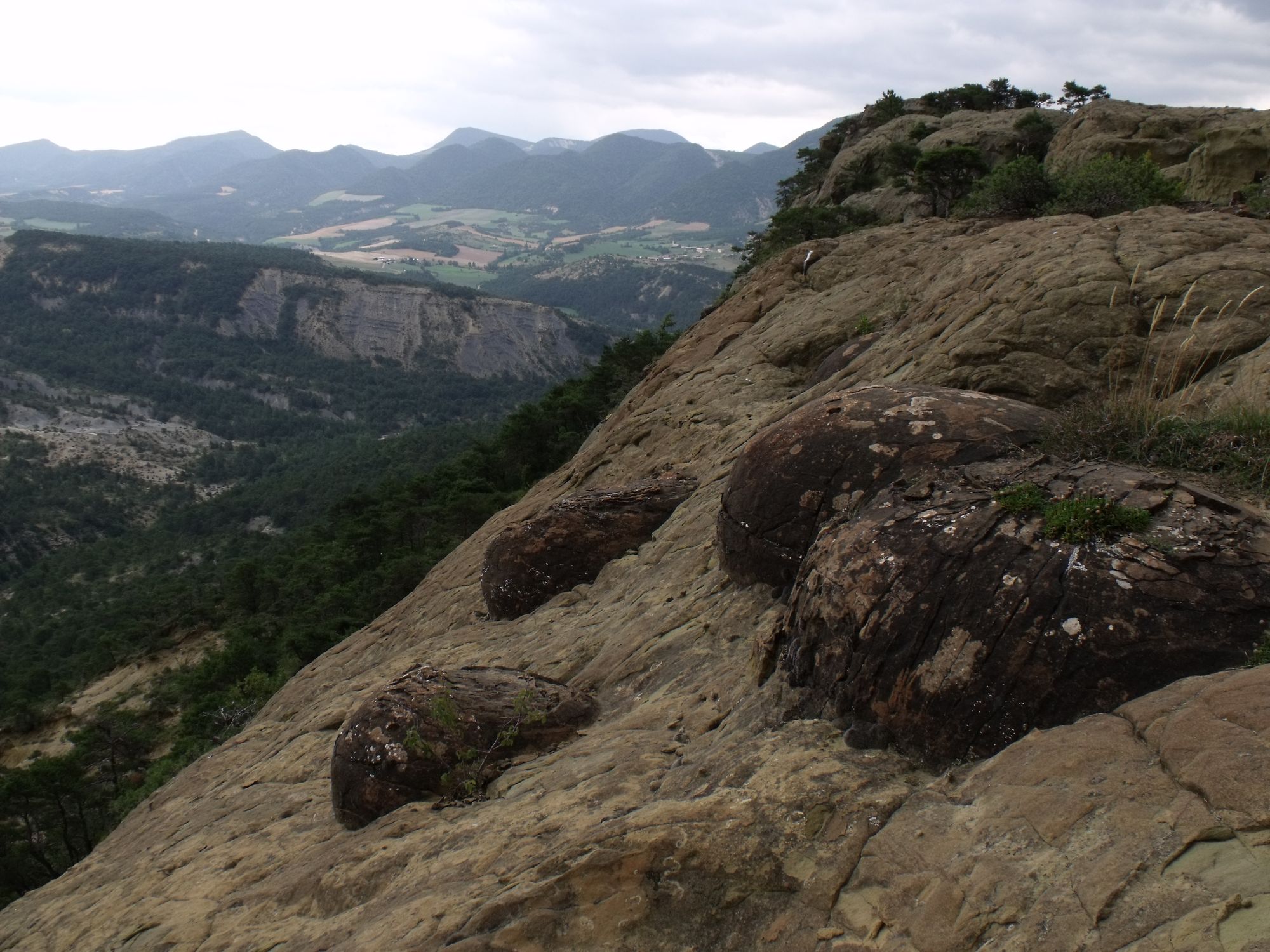 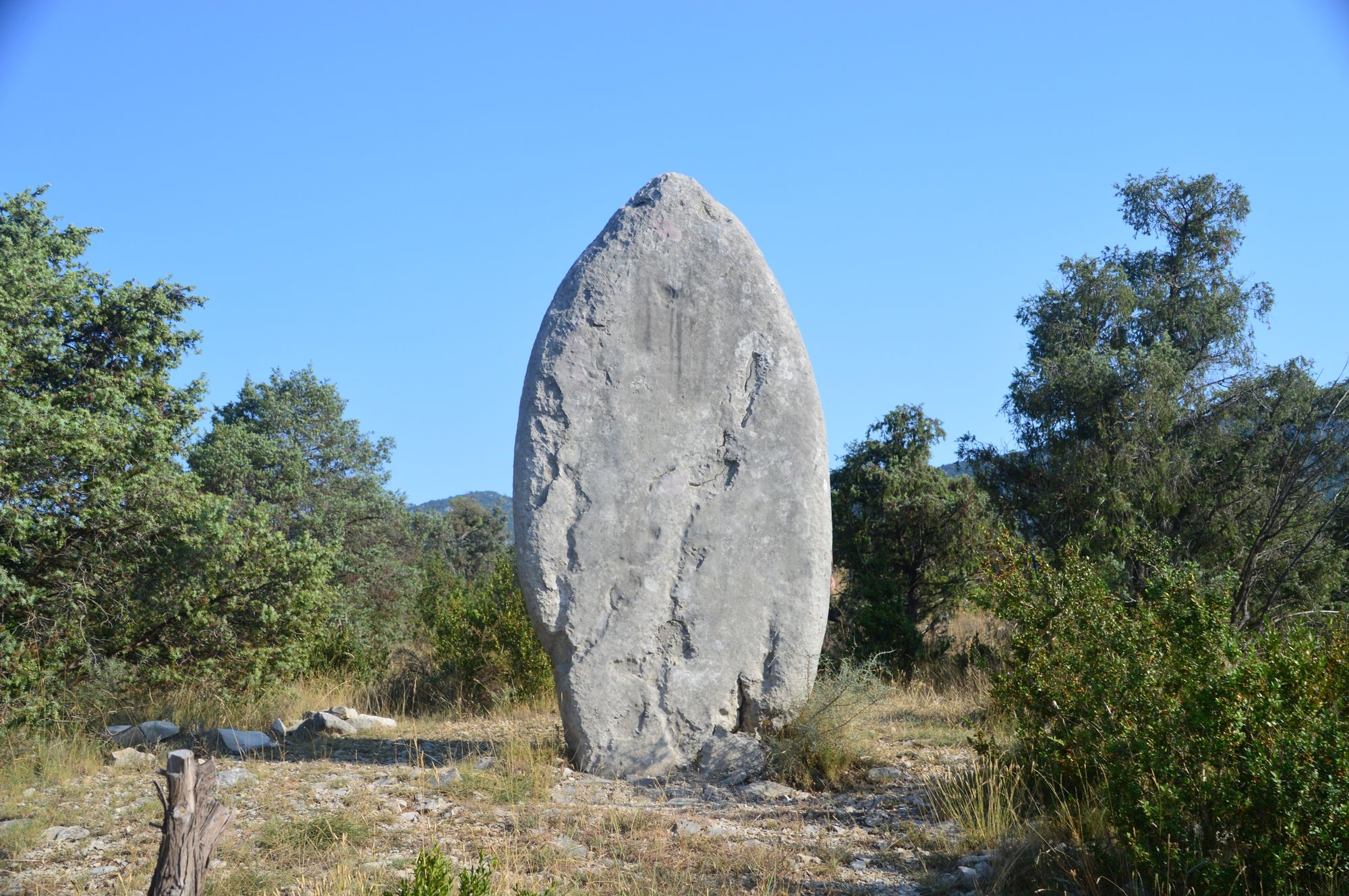