Lake Garda and The Big ‘Hob’day

On the 18th May we flew out to Malcescine to spend a week living life the Italian way and also get married in the towns castle. Our time in Malcescine was very relaxed, lots of wandering the cobble-stone streets, admiring the really cool castle from different angles and meeting friends and family in various cafes and restaurants. The town offers fantastic scenery making walks along the lakeside very pleasant, there are various boat trips on the lakes and the views from the top of Monte Baldo are spectacular, I took the cable-car up there for the morning view.

On the terrace after the ceremony 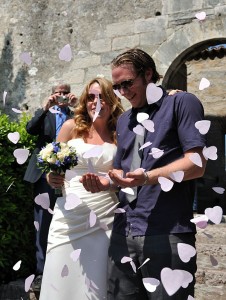 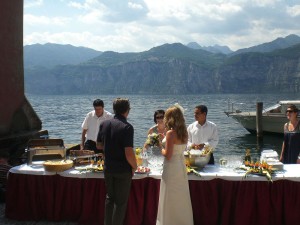 We got married on the Monday and started our honeymoon on the Wednesday, driving off in a hire car in the direction of Switzerland. 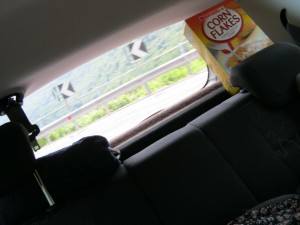 Flakes at the ready

For our honeymoon we spent 9 days on the road, including 6 days and 5 nights in Switzerland. We entered Switzerland from Lake Como stopping briefly in Lugano then travelled anti-clockwise around the country until we reached the Visp area and crossed the Simplon pass back into Italy. 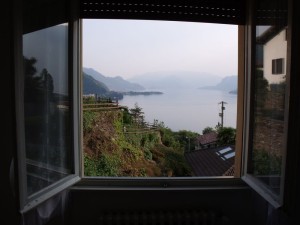 View from our room before we crossed the border

I was quite excited about the prospect of travelling around Switzerland, a relatively small country so easy to travel around and with neighbouring countries such as France, Italy and Germany I thought there would be a mix of culturally aware, cosmopolitan people with various cuisines on offer. Well I was disappointed. The scenery was beautiful, as you’d imagine Switzerland to be; full of lakes, snow-capped mountains and castles around every corner but this was ruined by the huge over-pricing, the miserable people (of course not all but I am generalizing) and the food was worse than England’s.

The weather was damp and drizzly as we entered the country and remained the same for most of the day. We visited Bellinzona with its Unesco castles, then we checked into a cute hotel and had some beers. Next day the sun came out and we headed north towards Schauffhausen, stopping in Chur for tea and then Liechtenstein for lunch (Full story of Liechtenstein below). We ended the second day sleeping in Schloss Laufen, one of the castles over-looking Europe’s biggest waterfall, the Rhine falls. 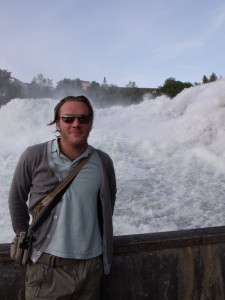 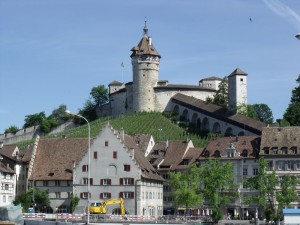 On our third day we spent the morning walking around Schauffhausen, a pretty medieval town next to the falls full of pointy spires and medieval buildings, the most interesting of which was the Munot, a circular 16th century fort on top of a hill. After lunch we drove down to Isewald, a little lake side town in Bernese Oberland (the Lake District) and got drunk in the evening. 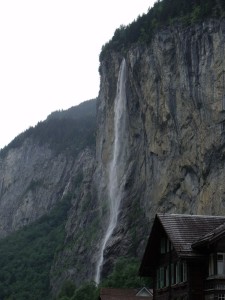 A waterfall in the lake district

We spent a day chilling in The Lake District which was very picturesque although a little spoilt by the town of Interlaken which seemed to aspire to become the next Benidorm. Next day we drove to Bern, a unique and pretty capital situated at a bend in the river Aare. I liked Bern and in particular the interesting architecture with medieval style buildings that were all the same shade of colour. From Bern we headed to Lake Leman and Lausanne but we were beaten by the torrential rain and ended up driving south around the lake to enter France and get some value-for-money accommodation and some descent food. 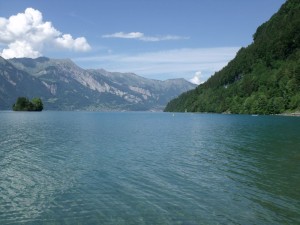 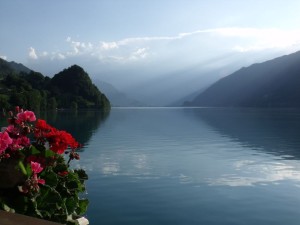 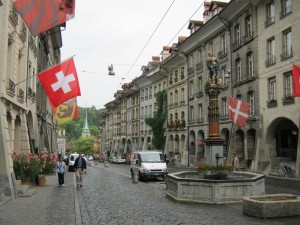 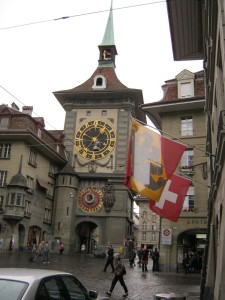 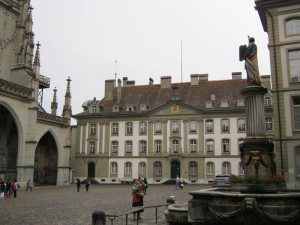 We were unlucky with weather from here on, the wind blew us all over the place in Geneva, which was basically a big block of concrete and in fact the wind was so strong they had to switch off the famous jet of water. From Geneva we drove passed the Lavaux vinyards which were nice but hard to fully appreciate when it’s raining. That night really finished us off as we ended up being completely ripped off with both the hotel room and the evening meal in Sierre. The hotel, La Grotte was £120 for an empty room over-looking a little lake with bad service and we paid shit loads for a couple of little pizzas, this was the peak of our general feeling of being ripped off while travelling through Switzerland. 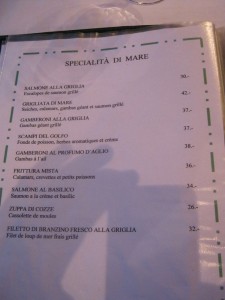 The menu that made me wanna cry 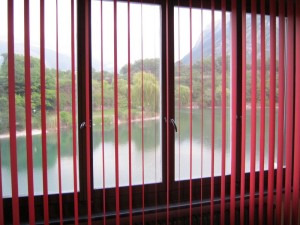 View from our empty plastic room

For our last day in Switzerland we drove to the Zermatt, ignoring the signs saying you needed police permission but the unlucky weather continued as the Matterhorn, the pointy mountain I wanted to see, was hiding in the clouds.
This was where I wanted to take my corn flake shot so rather than have a famous Swiss mascot in the background I chose to show my feelings about my time in Switzerland in a very immature way. 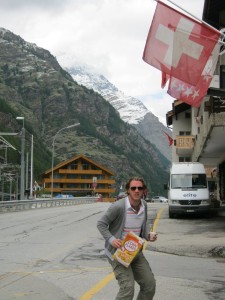 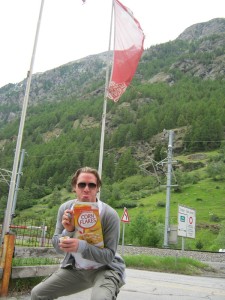 Xenophobic, miserable people and hugely expensive, I shall not recommend Switzerland to anyone…. or at least anyone I like.

My experience of Liechtenstein was brief although I found time to taste the local brew, eat some corn flakes and enjoy the panoramic view of an entire country. The border with Austria is defined by a mountain range so we entered the country into Vaduz and then drove up the range to be able to see the country, which leads down into the beautiful Rhine valley.

The 4th smallest country in the world is famous for its stunning natural beauty and measures just 25km in length and 6km in width (barely larger than Manhattan). It might be hard to find on a world map but it’s filled with quaint villages and spectacular views filled with mountains, lush forests and the Rhine Valley. Also famous for being the world’s largest producer of dentures and those who fancy a slightly different holiday this year can hire the whole country. For just £40,000 a night you can have accommodation for 150 guests, you will have the run of the land and use of the country’s police. Plus the new temporary ‘owners’ of the country will be presented with a symbolic key to the country in a ceremony at the state parliament, the guests will be treated to wine-tasting from the Prince of Liechtenstein’s personal cellar with skiing and a sumptuous dinner overlooking Vaduz Castle. BEWARE there is a two-night minimum stay and they don’t want no riff-raff. Read more 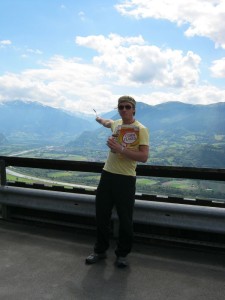 The quality of the lunch was a real step up from what we were having in Switzerland, the beer was also really nice and the view was breath-taking but to be honest with you the country is not worth coming a long way for and I’m pretty sure you could spend £40,000 more wisely. 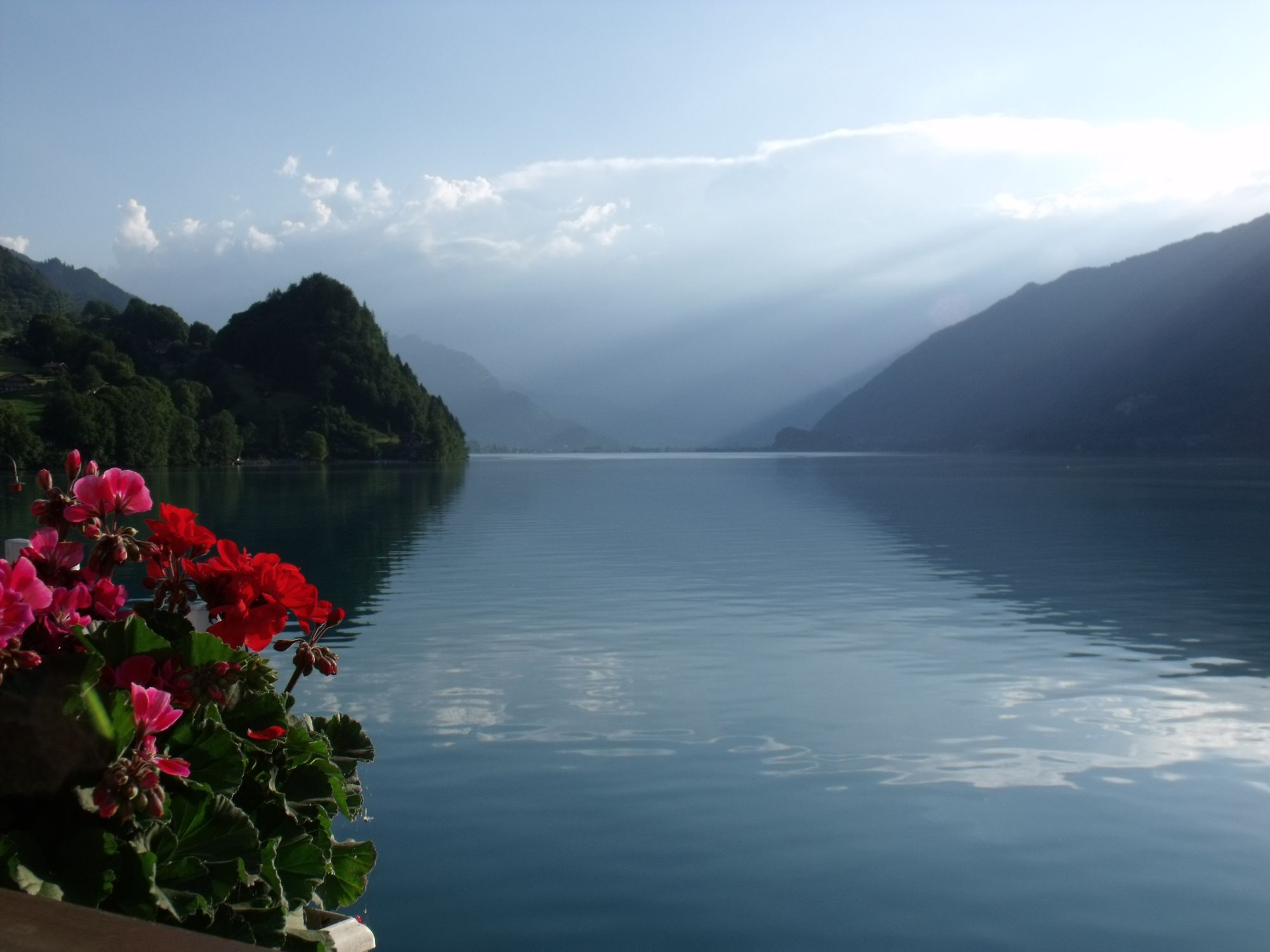 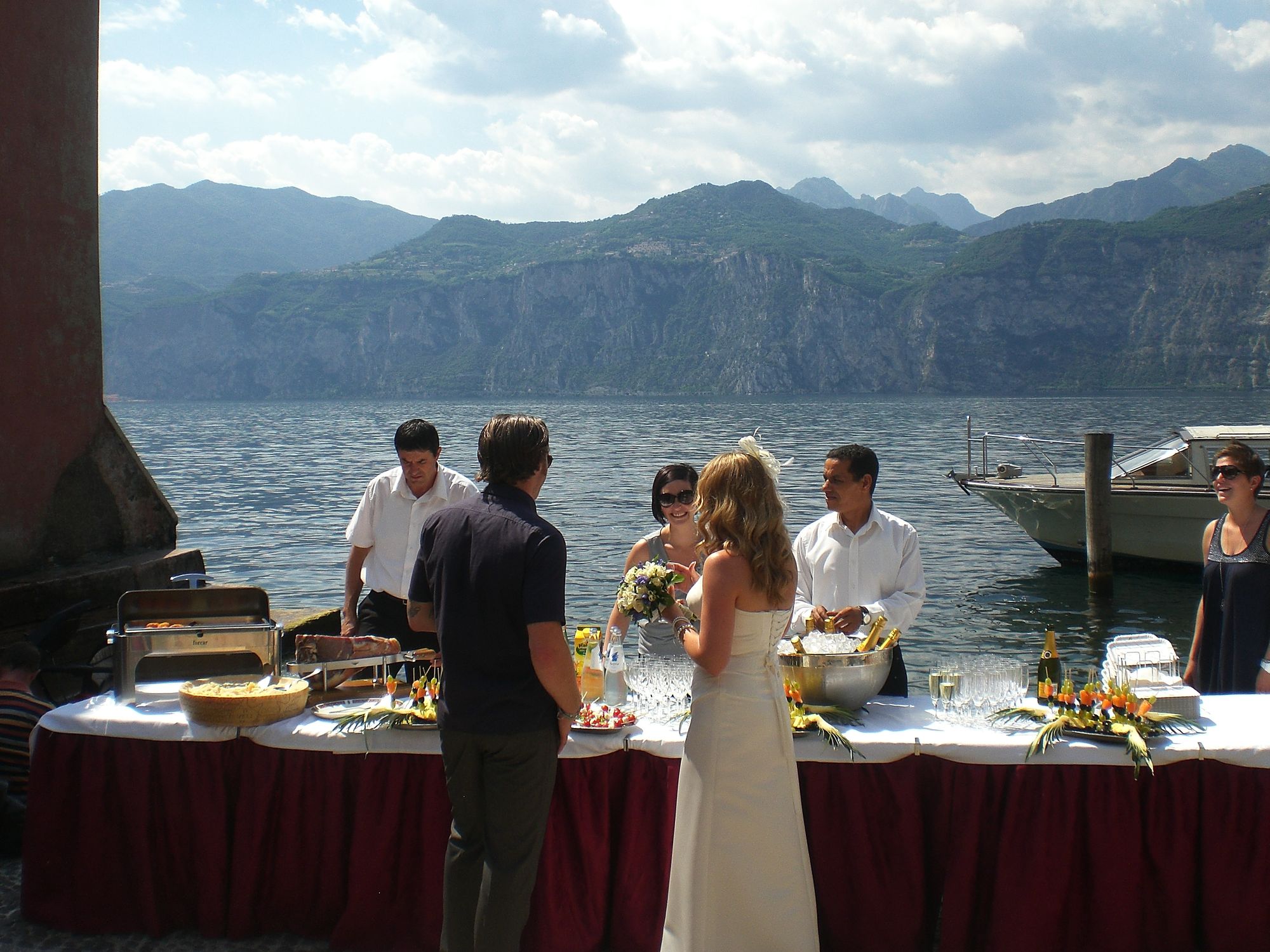 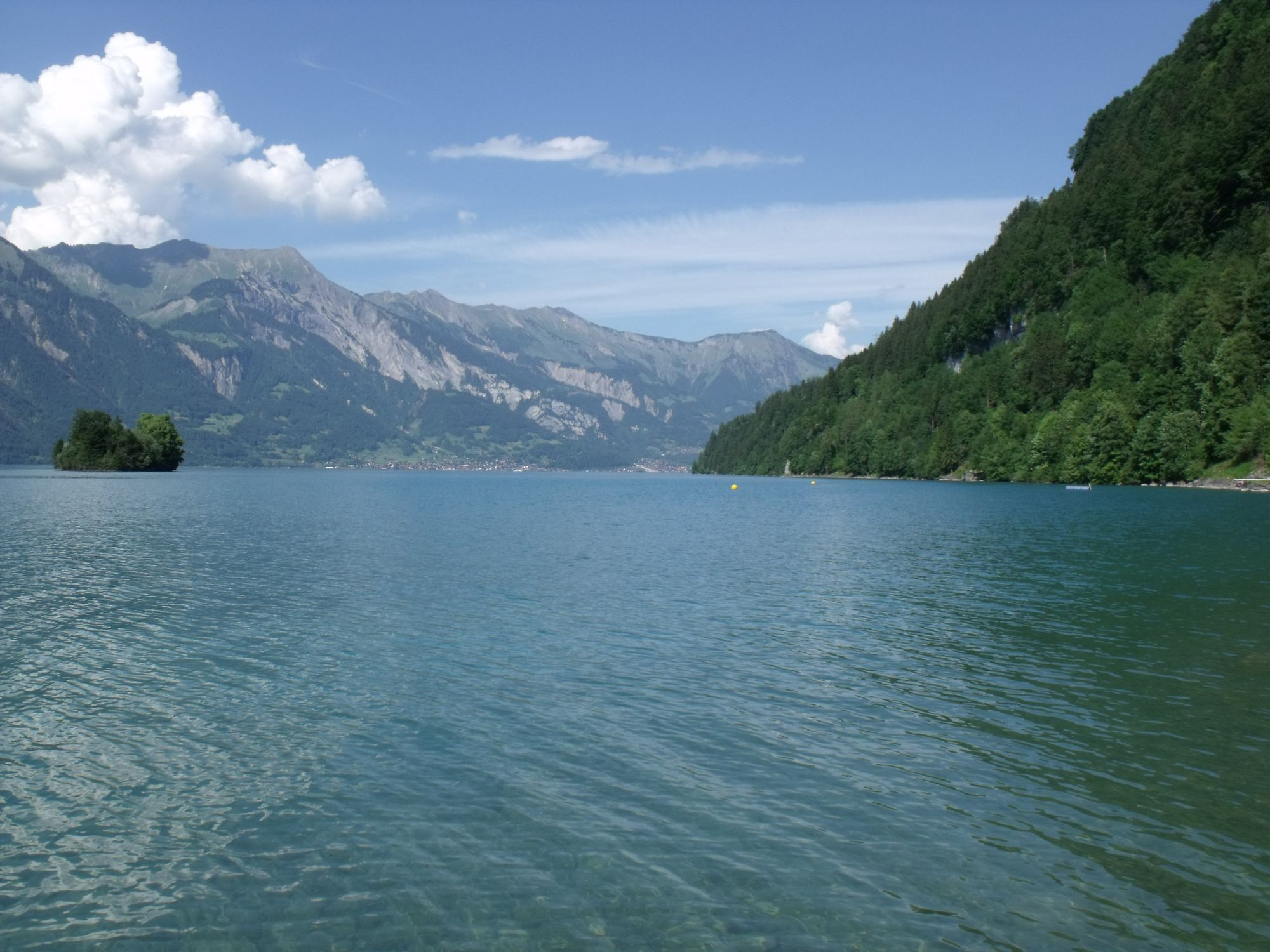 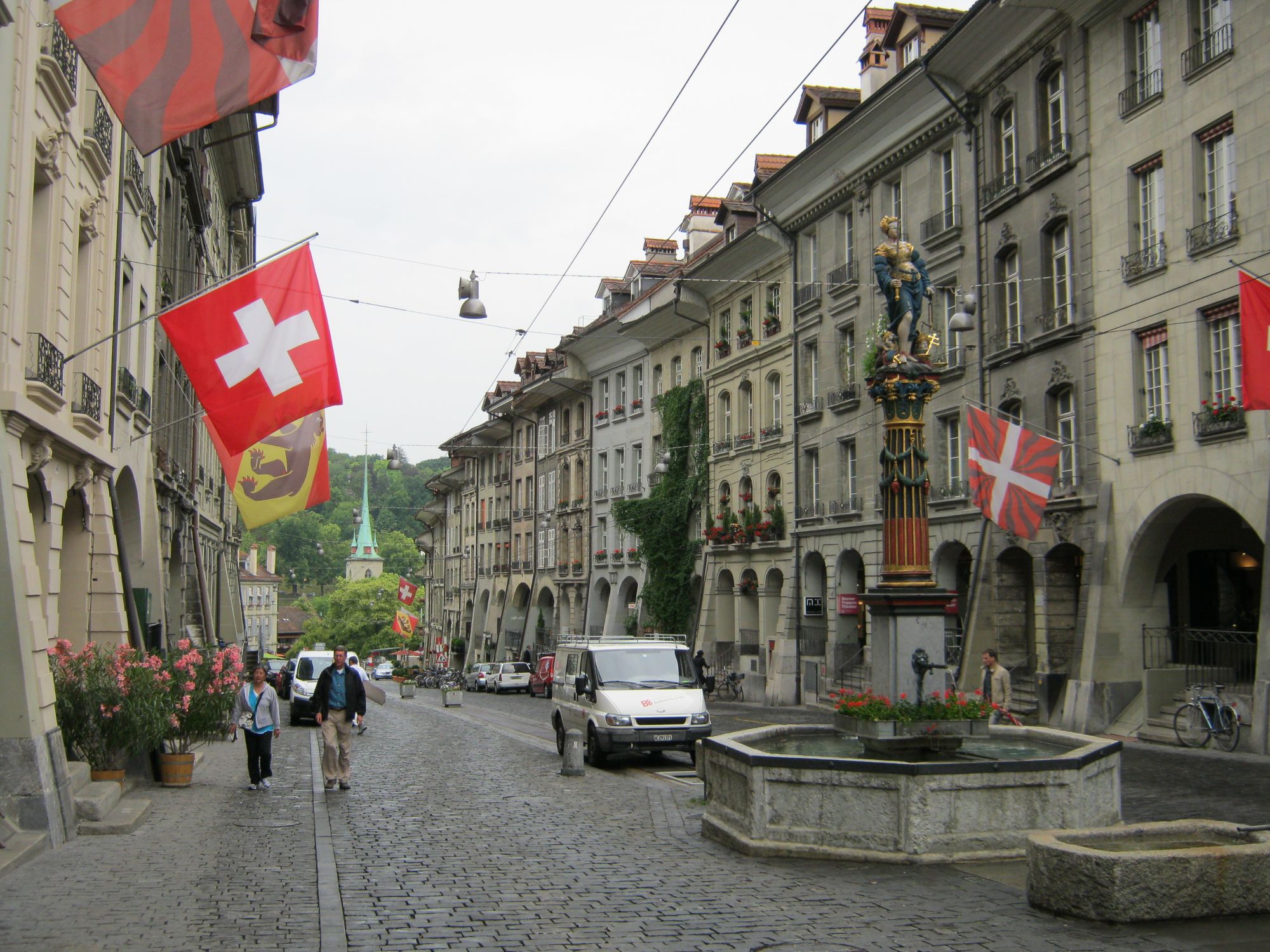