Our Cycle Route around Portugal

Portugal was a fantastic country, far better than I had expected with some beautiful countryside and extremely friendly and pleasant people. This trip started in Lisbon and finished in Mallorca, entailing a flight to Lisbon, cycling 950 miles, taking 2 trains, 2 ferries, and driving about a 1000 km across Spain. We flew into Lisbon on the 6th March 2012, We being me, the misses, 2 bikes and about 50 kilos of stuff. We spent 3 weeks cycling North to Porto during which we passed the lovely Obidos, the Mira de Aire caves and Porto. We then headed East until Vila Nova da Foz Coa before travelling South towards the Beach, which we finally reached when we took a train from Grandola to Albufeira. From Albufeira on the South coast we crossed into Spain and hired a car to drive to Valencia. From Valencia we took the ferry to Mallorca to stay with Steph’s sister while planning the next part of the trip.

A week in which we cycled from Lisbon around the coast to Sintra then onto Ericeira before heading inland to Obidos. We were so desperate to find a place to camp one night we set up camp in an open-prison but got moved on. We had a lovely nights sleep on Magoito beach, a great place with its noisy, long powerful waves, great views and loads of fisherman.

Steph setting off in Lisbon

A lovely beer at a lovely price

We were delighted by the price of the beers, about a Euro depending on the town and the ‘Super Bock’ was a joy to drink. Steph struggled with the hills and this caused the odd punch-up but we survived. We ended the week by getting a hotel room in Obidos, a really picturesque town with an old historic centre surrounded by a castle wall, which you can walk along the top of.

Walking around the castle wall in Obidos

From Obidos we headed inland for 4 days where the hills got worse and Steph suffered more but we reached Fatima to see the Mira d´ Aire caves and some fossilized Dinosaur prints near Barrio. We went to Batalha where there was a massive cathedral and statue to commemorate winning some battle years ago and Steph coped well this day when it started raining. We came back to the coast again around Marinha Grande and continued up through really nice forest, cooked our first meal of sausage and eggs then crossed a massive bridge into Figuera da Foz with its massive beach. Then we ended the week by having a nice meal and meeting some fellow cyclists, a German couple who had already been cycling 8 months and had reached 31000 kilometres. 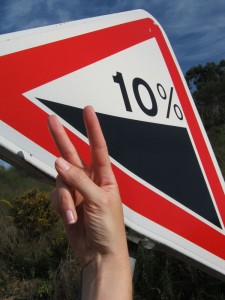 A message to the hills from Steph 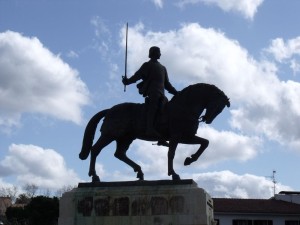 A statue in batalha 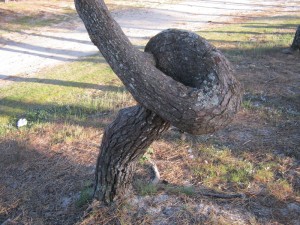 Some of the trees did this

A sign of how windy the coastal area was

We spent a boring day reaching Aveiro, then spent 2 nights there drinking cheap beer and enjoying hot showers. We ferried across to the Sao Jacinto dunes area and took another 2 relatively boring days to reach Porto. Porto looked really nice, with a really nice Unesco centre giving it that historic feeling and unique buildings built along the Douro river. From Porto we turned east and crossed more hilly country to finish the week camping outside the very pretty riverside town of Amarante. The day we reached Porto began with a big meat-head FBI-style agent questioning us with attitude about the contents of our tent, he suspected guns and was annoyed to be shown my dirty pants and cans of tuna.

Catching a boat from mear aveiro 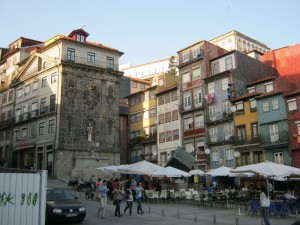 The centre of porto

From Amarante Steph loved spending 2/3 of the day climbing up for 10 miles, then half an hour descending 10 miles down, with fantastic views of the Douro valley, to join the river Douro, another Unesco world heritage spot. We followed the river Douro for a couple of days through the endless tiered vineyards, and passed plenty of winery’s. We camped in a town on the riverside one night and were accompanied by a group of teenagers drinking until gone 4 in the morning. The next day we got the train through more of the valley and arrived in Vila Nova de Foz Coa by lunchtime to start heading south but only after I had seen some of the ancient rock carvings. The carvings were spread out over a massive area and it was so hilly that I had to settle for copies in the High-tech museum which displayed impressions of the large carvings and had some of the pocket sized ones to see. I had my Portuguese corn flakes in Trancoso, one of the many, many hilltop castle towns and the next day investigated a megalithic site close to Celerico da Beira, with a mushroom shaped rock and strange rod shapes carved out of the rock around it. We finished the week arriving in Guarda to get a hotel for a couple of nights to wash some clothes and eat some decent food. 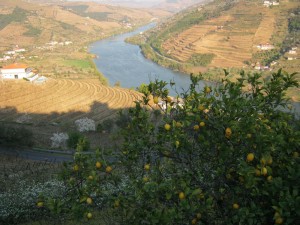 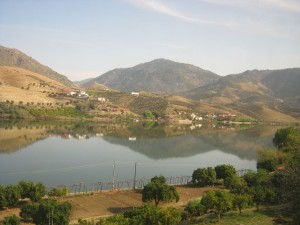 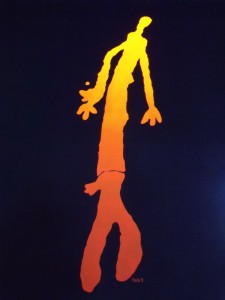 Ancient petraglyphs in a modern fashion 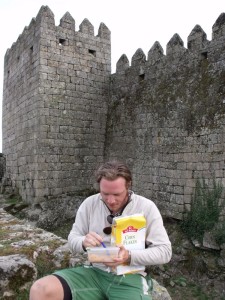 Corn Flakes in a hilltop castle 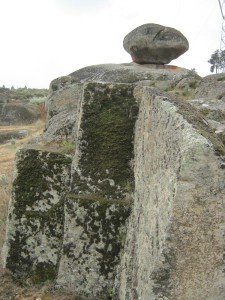 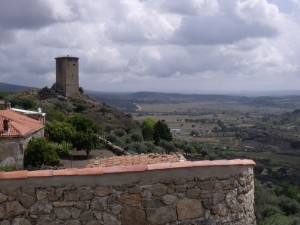 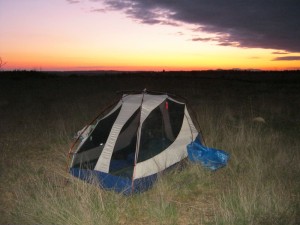 Camping on our approach to evora

From Guarda we continued heading south and cycled through hilly country with plenty of fruit trees and plenty more hilltop castle towns, the most noticeable of which was Monsanto built around, and using inventively, some massive boulders. We stayed in a hotel in Castelo Branco, had coffee in the Marble castle town of Estremoz and loved the cute Evora, another Unesco world heritage site with cobbled-stoned streets and roman structures like the temple and the aqueduct. We finished the week by visiting an interesting megalithic structure then camping next to the Cromelque Os Almendres, a stone circle that is 2000 years older than Stone Henge, a great place to camp with such atmosphere, the rocks have such presence. 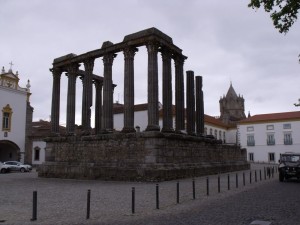 A Roman Temple in Evora 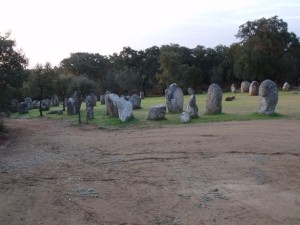 The stonehenge of Portugal

The sixth week therefore started with the sun rising over the Henge backed by brilliant views, we then cycled 50 miles motivated by our desire to take the train the next morning. The train took us to Albufeira where we encountered mass tourism and loads of English bars and restaurants, for this reason we cycled straight to the border, ferried across the river Guadiana to Spain and spent a day cycling through fields of oranges as far as the eye could see and then some nice marshy, saltland just outside Huelva.

My view when I woke up 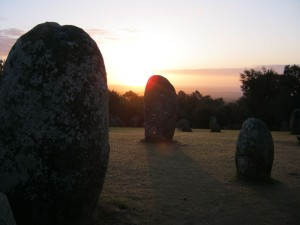 Sun rise at the stone circle

Albufeira – an escalator on the beach

From Huelva we hired a car and drove 1000 km across Spain spending time looking for more megalithic structures, stones and circles in the hills north of Huelva and strange building remains near Huescar. We spent time in Sevilla wandering the pretty streets and didn’t spend very long in Benidorm, an hour was enough. Xabia was nice, nice enough to spend the night in a hotel after spending the previous night in the car, although in Xabia we celebrated finishing the sixth week by only really seeing the inside of a bar. 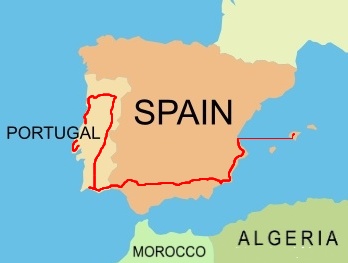 Our Route – bike for Portugal and car across Spain

Catching the ferry to Spain 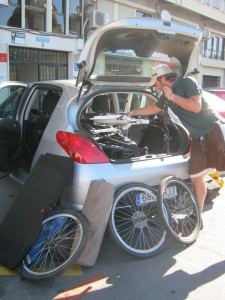 Packing the bikes and gear into the car

Some of the dolmen we drove to see

We arrived in Valencia after 2 ½ days in the car, dropped it off and cycled to catch the 11pm ferry to Mallorca, they squeezed the lorries in like Sardines, funny as Portugal is famous for Sardines (We saw sardines everywhere in Portugal). We slept on a circular table and then got off the ferry at 7:15am and cycled 17 miles to Alaro to meet Steph’s family, her sister lives here and her parents were visiting. It was the end of Steph’s trip but I continued by taking the bike to Turkey, after 3 weeks of Family time and a little exploring of Mallorca. 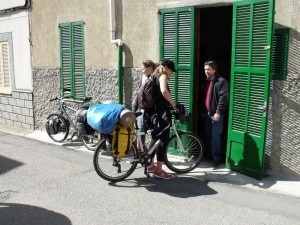 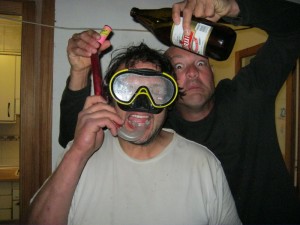 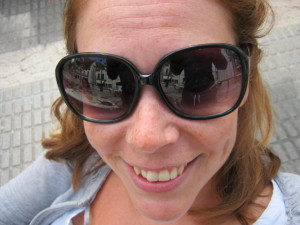 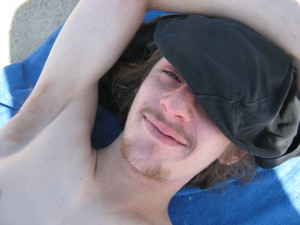 For a country by country look at this trip with bigger photos. 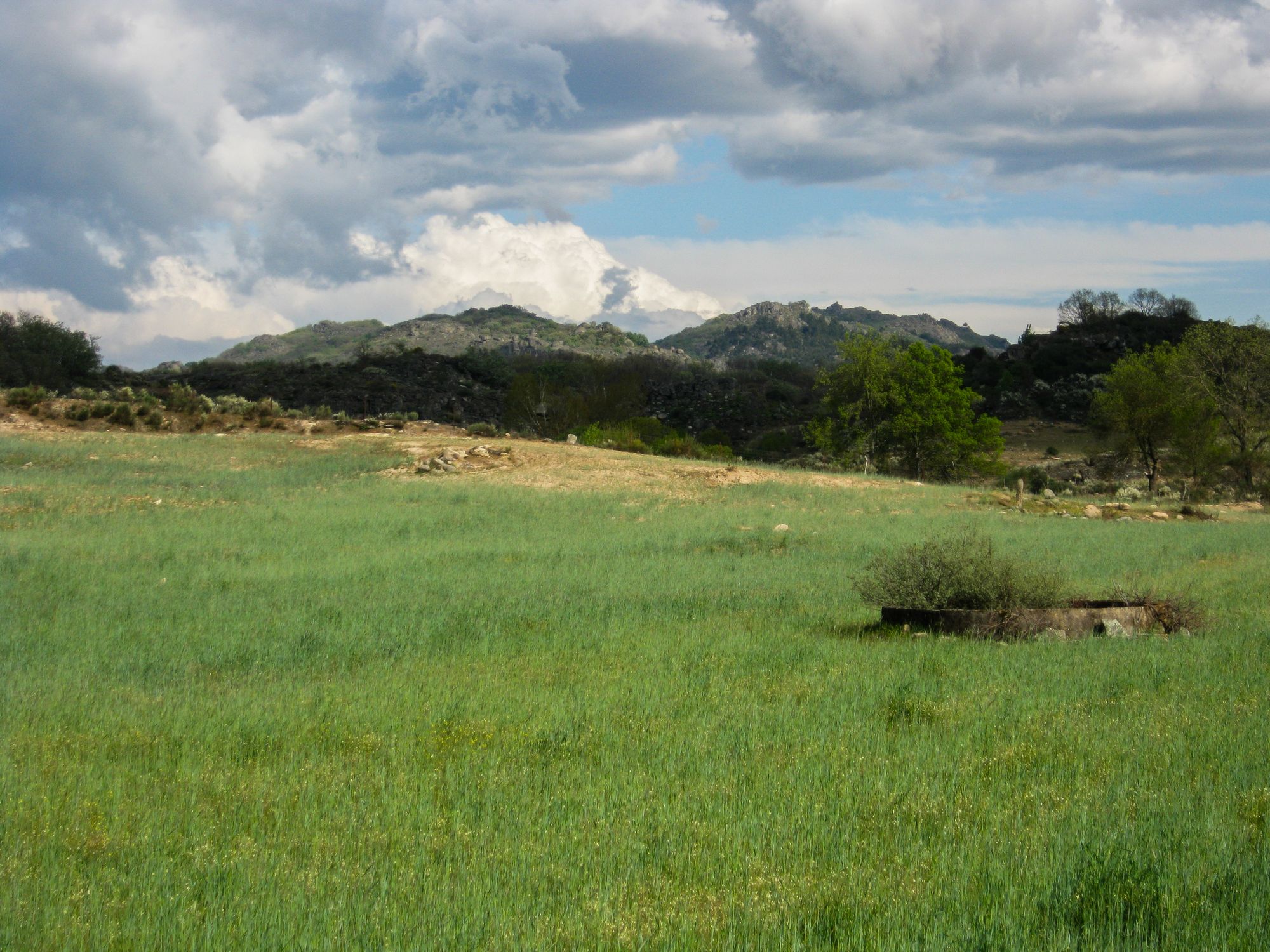 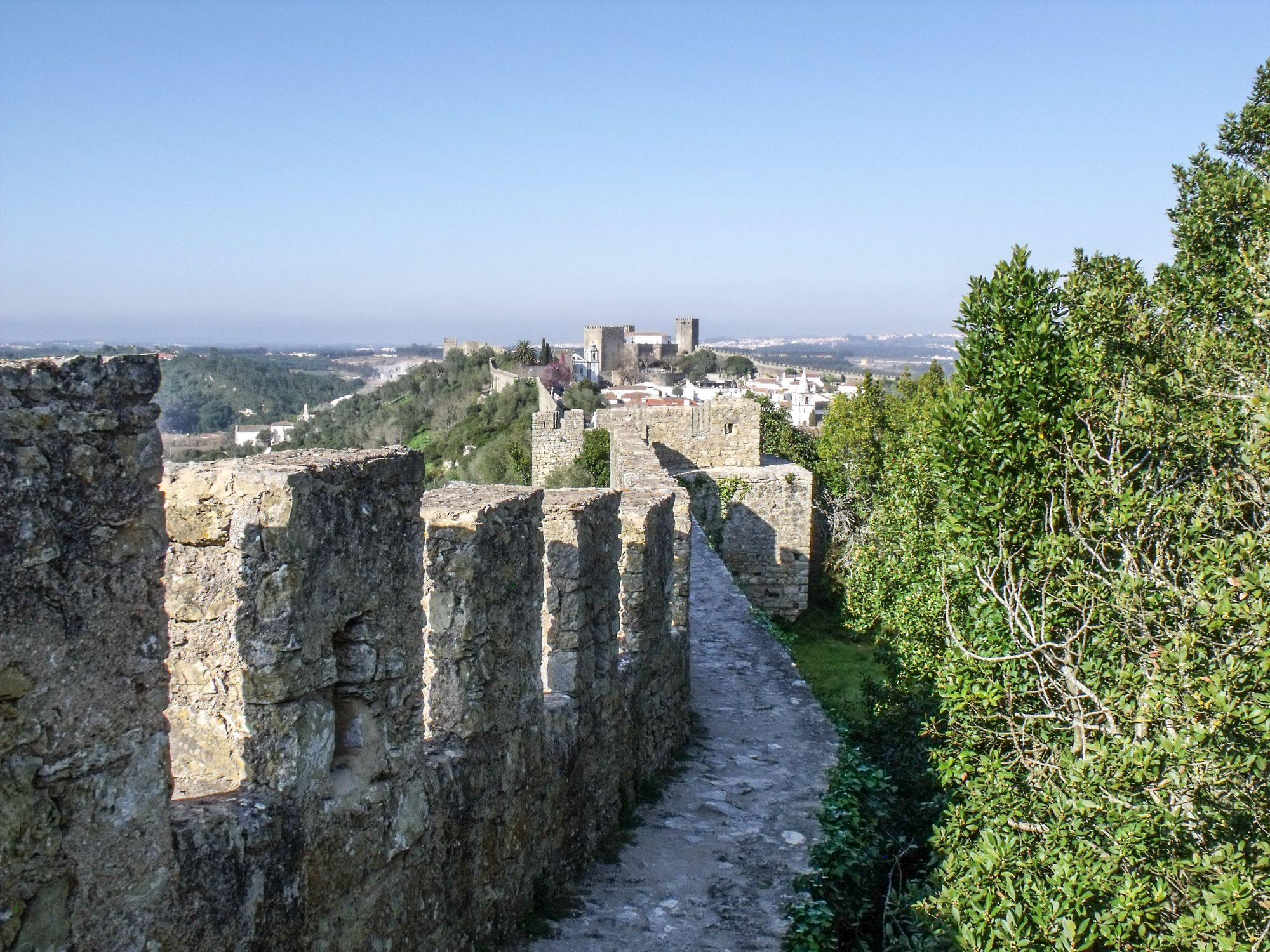 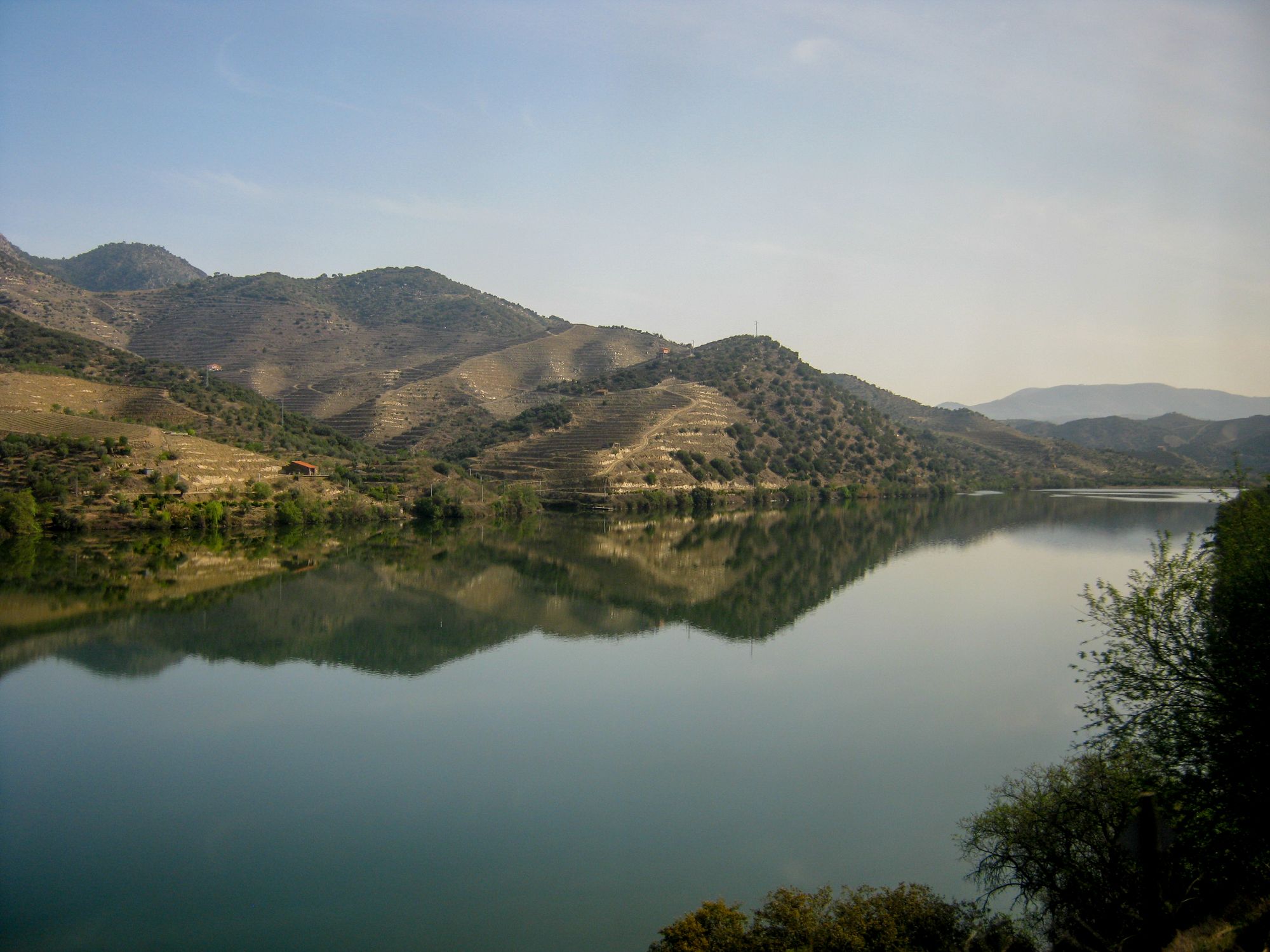 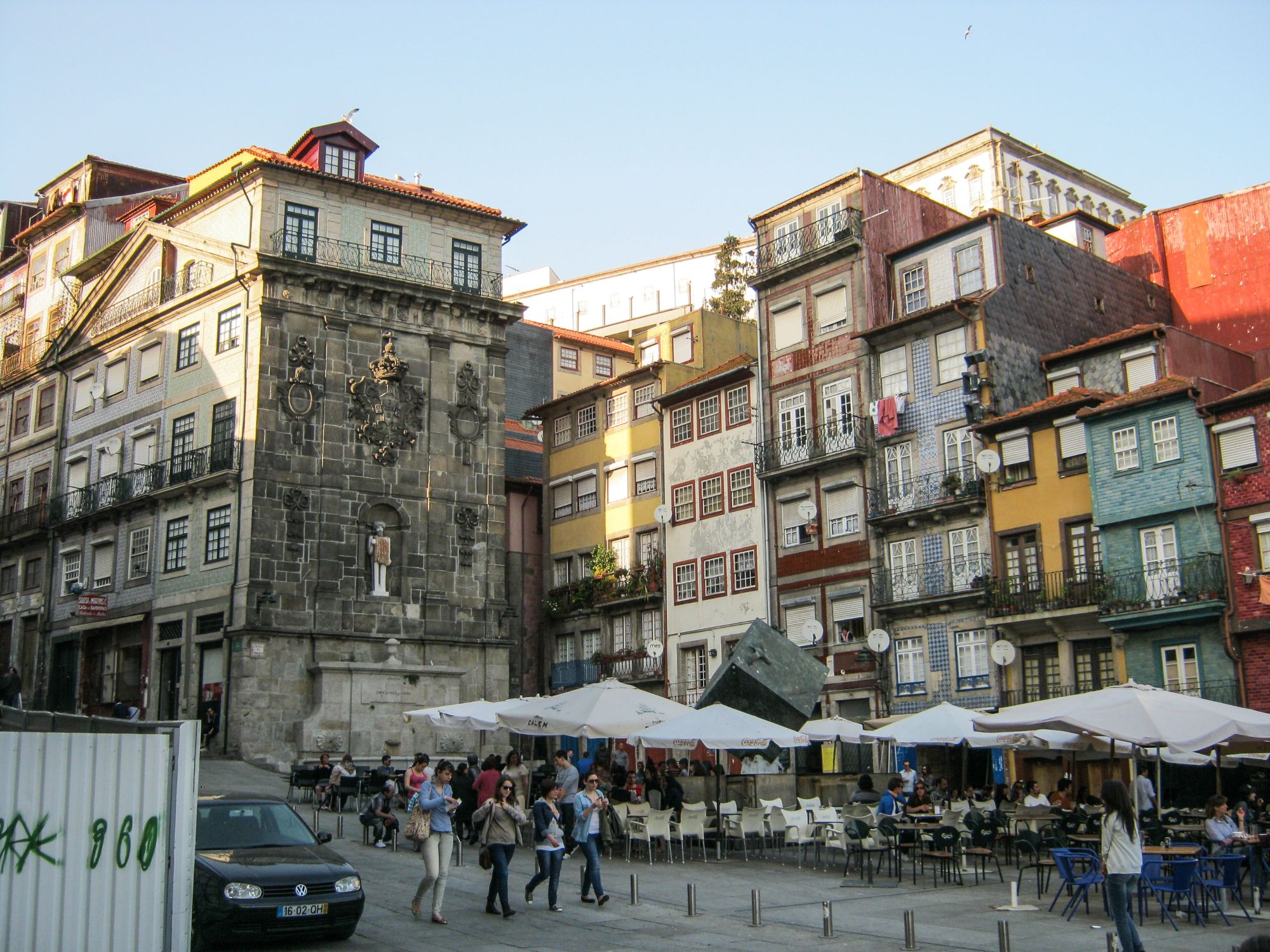