Home My Travels Cycle Touring A Loop Around Spain

I spent 46 days cycling about 2590 miles in an clockwise direction around Spain. I left Barcelona and headed South along the coast until Cadiz and then returned north through the centre of the country via Sevilla, Madrid and Salamanca until I arrived in Santander. From Santander I cycled east along the coast and then parallel to the Pyrenees until I reached my finishing line in the little hilltop town of Roda de Isabena. 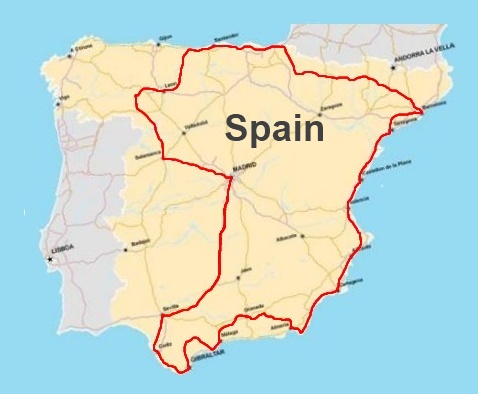 I explored Barcelona for 3 weeks and then on the 16th of March 2009 I left the city on a mission to reach Valencia in time to see the end of the Las Fallas festival. This meant I only 4 days to cycle approx. 250 miles and on the first day my situation became even more of a challenge as my chain snapped and I had to back-track to a bike repair shop in Sitges. I travelled quickly only stopping to rest when really necessary and to take a quick look at Tarragona and the Delta de l’ebre. 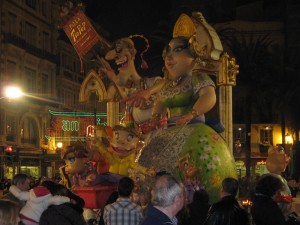 Las Fallas – One of the caricatures 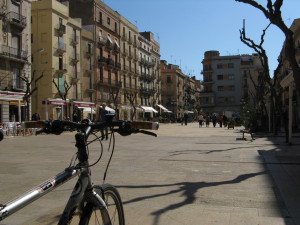 Taking a break in Tarragona

I arrived in time to see some of Valencia in the daylight and stayed until about 2am to see the burning of hundreds of elaborate caricature constructions which light up the night sky. I had to sleep in some bushes in the park and in the morning while leaving the city I cycled passed the very modern but extremely impressive science museum. 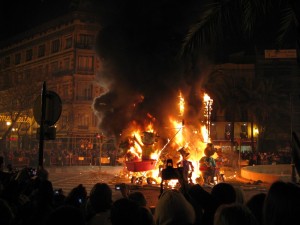 Burning the caricatures at midnight 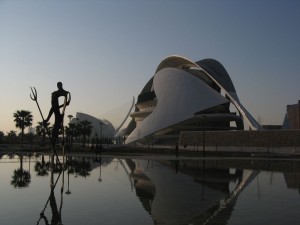 After ValenciaI continued heading South along the coast, cycling through Alicante, Cartagena, Aguilas and the best of all was Benidorm, a ‘you have to see it to believe it place’.  I stayed for an hour to soak up some culture, English football on bar Tvs, wobbly pink bodies waddling around and fish, chips and mushy peas.

A menu in Benidorm 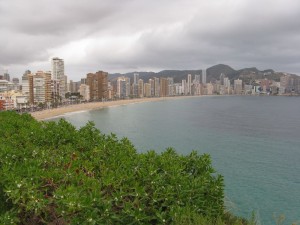 After Carboneras I reached the beautiful Cabo de Gato with its rocky coastline and here I slept on a massive beach. From Cabo de Gata I cycled away from the coast and headed into the Sierra Nevada mountain range intending to cycle up to one of the peaks although I changed my mind when I saw the size of the monsters standing around 3400m in front of me. I crossed some smaller mountains to arrive in Granada but it was freezing cold and kept raining so I didn’t stay very long, just a quick bite to eat and a glimpse of the outside of the impressive Alhambra. From Granada I continued towards Velez-Malaga having to cross more mountains and cycle around lakes and at one point it even began to snow. After battling the cold I was relieved to descend from the mountains and reach the coast again, which was considerably warmer at a lower altitude. 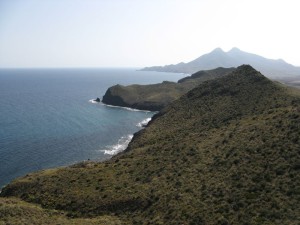 camping on the beach after being in the mountains 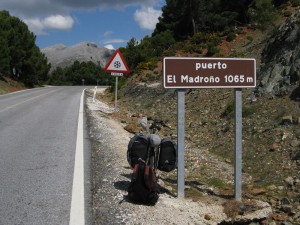 Climbing up towards Ronda

I followed the coast past Marbella before cycling back into the mountains to reach Ronda and the start of the cycle along La Ruta de las Pueblos Blancos (one of my highlights). The scenery was beautiful, the towns characterised by whitewashed walls and red or brown tiled roofs all situated on a chain of mountains mostly within the Sierra de Grazalema Natural Park. This route lead me down to the very weird and confusing Gibraltor with its roadsigns from England and even English tarmac’d roads and everything in English. English, English, weird as it’s just a big lump of rock. 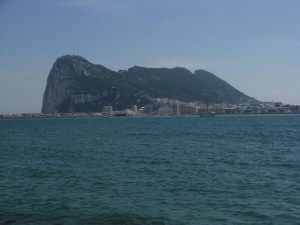 Seeing Africa across the water from Tarifa was cool and really made me want to visit (hence my next trip) Cadiz was pretty enough nowhere near as impressive as the beautiful Sevilla, full of historic buildings. I was there for the semana santa procession which was really interesting, although a little spooky as the costumes resemble those used by the KKK. 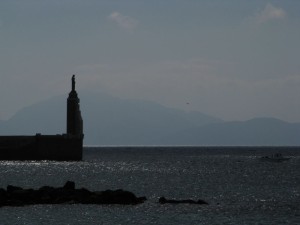 The port in Cadiz with Africa in the background

The procession through the historic centre of Sevilla

The Easter parade in Seville and the city itself were highlights as was the Autopista Incident which happened to me while I was cycling along yet more motorways. Bascially I was having real problems with the road system and on many occasions had to join the autopista and on one of these occasions a truck full of cows overtook me and one was taking a leak as it passed covering me in sweet smelling cow piss. 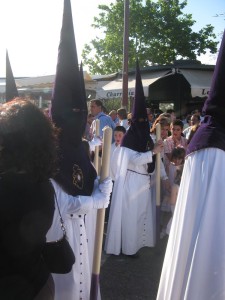 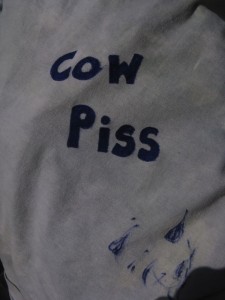 I wrote this to remember a funny moment

From Sevilla I spent 4 hardcore days cycling in order to reach Toledo in time to meet my girlfriend. I passed Cordoba, Montoro, Puertollano and Ciudad Real, spending some time in Cordoba wandering the streets and enjoying the traditional architecture. Montoro was set in a pretty location and the countryside from Montoro to Ciudad Real was particularly pleasant. Just outside Cordoba I was overjoyed to wash my body with soap for the first time in 23 days, using a river I camped next to.

Washing in a river near Cordoba

Toledo was a really nice castle style town, I spent 2 days here with Norma and 2 more in Madrid, a well needed 4 day rest from the saddle. It was amazing to spend €215 in 4 days in comparison with the €150 I’d spent in 25 days cycle touring but when hanging with girlfriends you get different experiences for example I learnt that it’s some sort of custom to pour fizzy wine from a height, I did quite well at it. 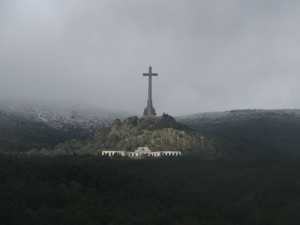 The Valley of the Fallen

After Madrid I visited the valle de los caidos (Valley of the fallen), a supposed tribute to those that died in the civil war but it seemed to pay homage to Franco. It was impressive to cycle up through a valley and discover a 150 metre high cross and the huge basilica beneath it. From here I visited El Escorial, one of the Spanish royal sites which functions as a monastery, royal palace, museum, and school. I then continued on towards Avila, another really nice castle style town. 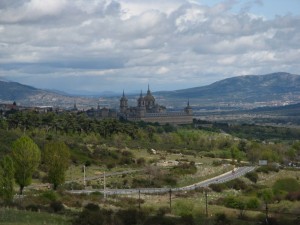 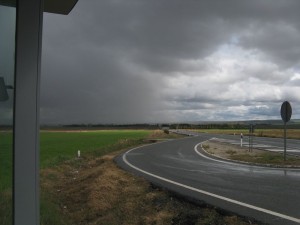 Running away from the rain 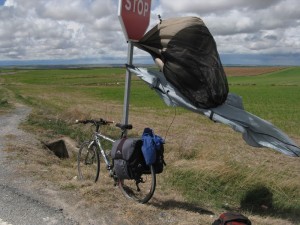 Drying my equipment in the wind

Day 33 I cycled through Salamanca (“The golden city”) with its golden glow coming from the buildings built from a type of sandstone taken from a nearby quarry. From Salamanca I joined the Camino de Santiago (or one of the three routes that run through Spain) and continued north before crossing the Montes de Leon. 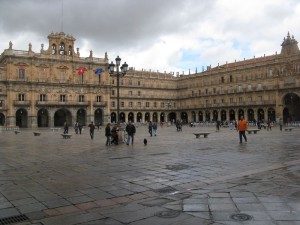 The main plaza in Salamanca

My favourite experience of the trip was crossing the two mountain ranges; the Montes de Leon and the Picos de Europa, with breath-taking scenery and the descent from the peak of the latter range (Puerto de San Glorio at 1609m) following the river down as it twisted its way through the mountains to the coast was such a great experience. 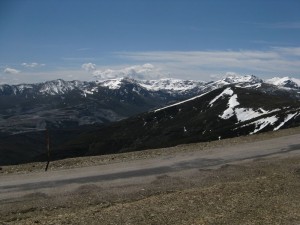 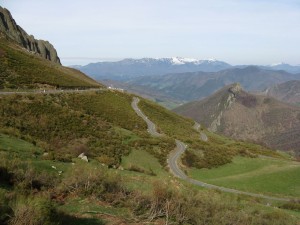 The road that twists its way down to the sea

In between the two ranges there was a cool Unesco site; las Medulas, a former hill excavated for gold by the Romans and left as red pinnacles jutting from the ground. I also joined another famous part of the camino de Santiago between Astorga and Leon where I saw many pilgrims walking and cycling. 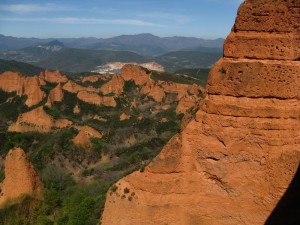 I spent 3 days cycling along the coast and ended up camping in a park in San Sebastian. On Day 43 I started cycling from the coast across to Barcelona and I had an incident that showed me the good in people and it became one of my highlights when a guy gave me a Lift though a Tunnel, an act of kindness that saved me a big, long climb over some mountain peaks.

The van that took me through the tunnel

A tunnel climbing up into the mountains 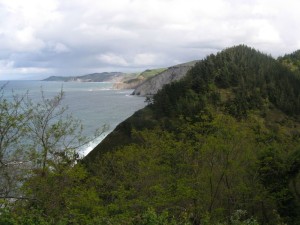 The North coast cycling towards France 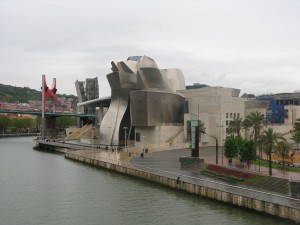 A famous museum in Bilbao 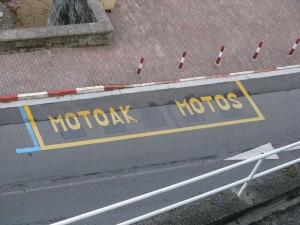 The next few days I continued on towards Barcelona, riding parallel to the Pyrenees, another area of pure unadulterated natural beauty that I will never forget. The area was full of religous monuments and houses of worship, cute little hilltop towns, nice lakes and some great views of the mountains. The view from the campsite where I spent my last night was insanely picturesque. 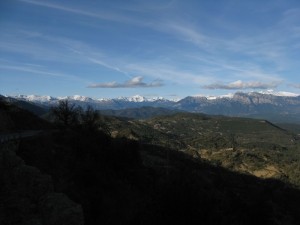 I met Norma in a hilltop town in the mountains called Roda de Isabena and after a few days driving around the mountains I went back to Barcelona to look for work. The search didn’t go very well, in fact I only managed to work one day and ended up going back to New York for 2 months to stay with a friend and earn funds for my trip to Africa. The one day of work I did was actually a night, and one of my highlights, Working for Sonar, the weekend long music festival. It was pretty intense serving people so quickly in another language, I couldn’t believe the prices at €7 a drink so I was being very generous with the spirits, in fact so much so people kept bringing their drinks back and asking for more coke. A great experience and I got €135 for it too.

A really cool trip which such variety and that usual feeling of being free, cycling through the country stopping to camp wherever I want. I cycled 2590 miles or 4162km and spent 439,29 Euros, 200 of those during the 4 days rest from the saddle. 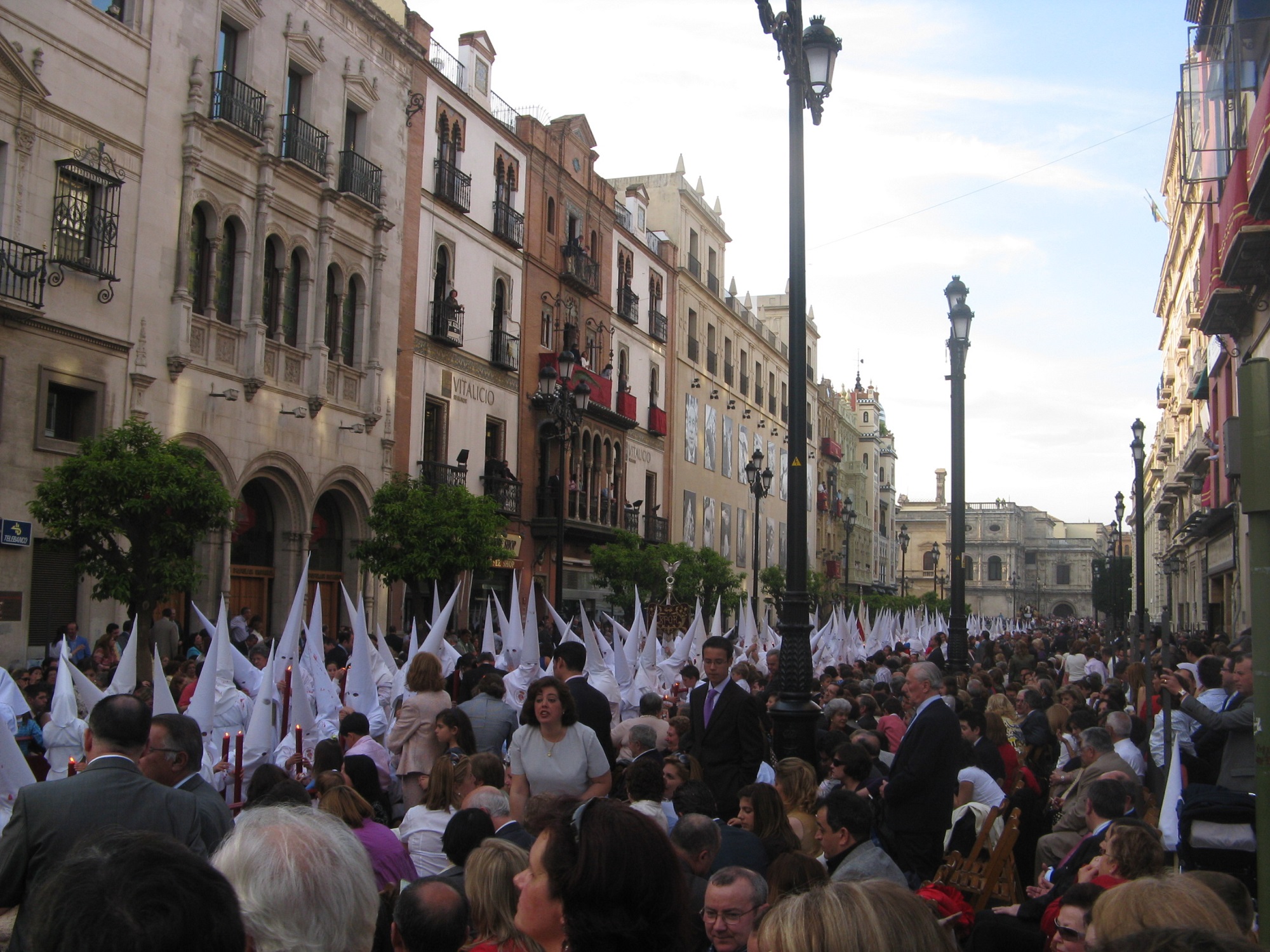 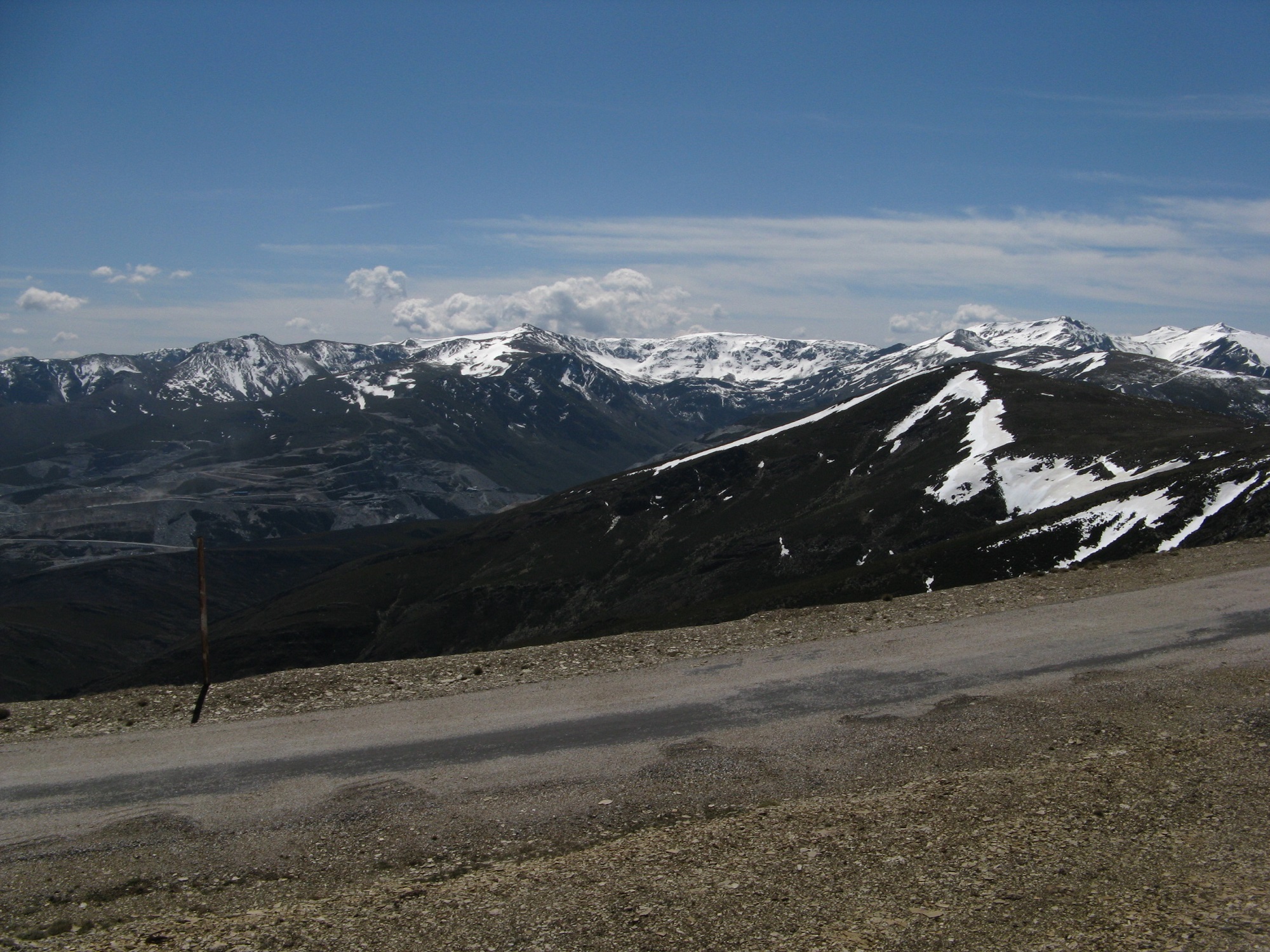